I’m not angry with my critics, says Ighalo 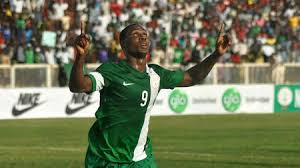 Odion Ighalo has said fans were overtaken by passion when he failed to score at the World Cup in Russia, while pledging to always give his best in a Super Eagles shirt.

Fans, particularly on social media, were vociferous in their criticisms of the former Watford star at Russia 2018.

“The fans love football, they are passionate about the Super Eagles and so sometimes you don’t blame them when they are angry,” Ighalo said in a radio interview.

“As a striker they wanted me to score goals at the World Cup, but unfortunately it was not so.

“Some of the fans took the criticisms to another level, which was bad, but I can understand them because I am a professional and so whatever comes with that, you have to go with it.


“I thank the fans who believed in me even after the World Cup, and those who didn’t believe in me, I still thank them because they were supporting the Super Eagles.

“Hopefully, I will work to give my 100 per cent whenever I play for the national team.”

On Saturday, Ighalo scored a hat-trick against Libya to now take his goals record with the Eagles to eight goals in 24 appearances.

Coach Gernot Rohr said his goals were the perfect answer to the critics.