He got 200,000 votes after dancing – Osinbajo mocks Senator Adeleke 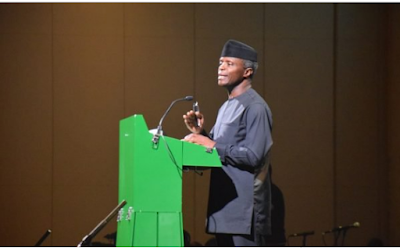 Osinbajo said Adeleke polled about 200,000 votes in Osun election despite his insistence that the most important attribute for leadership was dancing.

The Vice President made the statement while trying to prove his claim that Nigerians were the most humorous people in the world.

Osinbajo said this in his remarks at the dinner and gala night held at the Presidential Villa, Abuja marking the nation’s 58th independence anniversary.

Although Osinbajo did not mention the name of the Senator, the events he mentioned clearly pointed in his direction.

Osinbajo said, “A few years ago, a poll reported in the British Independent Newspaper declared us the happiest people on earth. The same poll said that we were also amongst the most optimistic people on earth, despite everything that we’ve experienced as a nation.

“I agree with both assessments, in other words, that we are possibly one of the happiest in the world, but I must also add that we are, by far, the most humorous people on the face of the earth.

“Well, if you don’t agree with me, but I can tell you so many reasons why we are the most humorous.

“A very important politician insisted, and still insists that the most important attribute for leadership is dancing, and boy he can dance!

“And for those who think that that is ridiculous, at least 200,000 people voted for him in a particular election.”