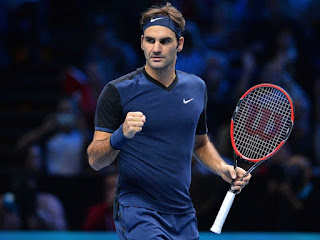 Roger Federer blazed into the Shanghai Masters semi-finals with a 6-4, 7-6 (7/4) victory over Kei Nishikori as the Swiss great’s title defence belatedly caught fire on Friday.

The other semi-final tees up Novak Djokovic against young German star Alexander Zverev, just the second time they will have met.

The 37-year-old Federer was forced to battle through the first two matches of his title defence, first to Daniil Medvedev and then Roberto Bautista Agut.


He put Nishikori under the cosh immediately, breaking the eighth seed in the first game of both sets, though the Japanese did well to recover and force the second-set tie break.

Djokovic saved set point in the opener before taking control of the tie break and the second set to dump out the South African seventh seed.

The 31-year-old from Serbia is in blistering form, winning Wimbledon, the Cincinnati Masters and US Open in recent months, after having elbow surgery in February.

Djokovic and Zverev met on clay in the final of the Rome Masters in May last year, the 21-year-old German winning 6-4, 6-3.

Djokovic, who endured a turbulent last season with injury and off-court issues, said they were “both different players” now.

“But also he has improved a lot and he has established himself as a top player.

“It’s going to be definitely a close match.”

The 6-4, 6-4 victory over the 11th-seeded Briton seals Zverev’s place in the season-ending ATP Finals in London next month, which bring together the top eight men.

Zverev, now under the tutelage of Ivan Lendl, said he is pleased with his overall progress, even if a maiden Grand Slam remains elusive.

“Last year was the first time I kind of broke through to the top 10 and was a top-five player.

“It’s always easier to get there — but then staying there is always the tougher part.”