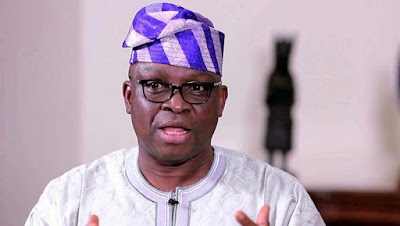 The outgoing Governor of Ekiti State, Ayodele Fayose, has threatened to dump the Peoples Democratic Party, PDP, coming after the conduct of PDP national convention on Saturday in Port Harcourt, Rivers State.

The governor gave this hint to the Punch on Monday, stating that he would renounce his “membership of the PDP anytime from now.”


He added, “After consultations, I will speak clearly to Nigerians.”

The former Vice-President, Atiku Abubakar, was declared the winner of the party’s presidential primary, defeating the Sokoto State Governor, Aminu Tambuwal, and Senate President Bukola Saraki, to a second and third positions.