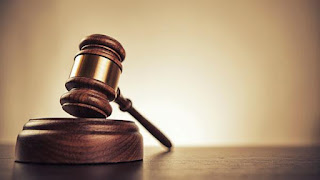 The Federal High Court in Abuja, on Monday, fixed October 31 for the arraignment of the Peoples Democratic Party’s governorship candidate in the September 22, 2018 election in Osun State, Senator Ademola Adeleke, and four others, on charges of examination malpractices.

The judge, Justice I.E Ekwo, during a brief hearing, which was stalled due to Adeleke’s absence on Monday, directed the Inspector-General of Police, Mr. Ibrahim Idris, to ensure all the five defendants were brought to court for arraignment on October 31.

“The prosecution is ordered to ensure the defendants are in court at the next date, to take their plea,” the judge ruled.

The IG, through the prosecuting counsel, Mr. Simon Lough,  had on September 19, 2018 filed four counts of examination malpractices against Adeleke and his four co-accused.


Adeleke, who was defeated by the All Progressives Congress’ candidate in the Osun State governorship election, Adegboyega Oyetola, has filed a petition before the election petition tribunal challenging the cumulative results of the September 22 election and the September 27 re-run declared by the Independent National Electoral Commission.

The prosecutor, Lough,  informed the judge on Monday that the matter marked, FHC/ABJ/CR/156/2018, was coming up for the first time on Monday.

The prosecution accused the five defendants of committing examination malpractices by fraudulently, through personation, registering Adeleke and another Sikiru Adeleke, as students of Ojo-Aro Community Grammar School, in Ojo-Aro in Osun State, for the National Examination Council’s June/July 2017 Senior School Certificate Examination in February 2017.

Charged by the police alongside  Adeleke were, Sikiru Adeleke; the principal of Ojo-Aro Community Grammar School, Alhaji Aregbesola Muftau; the registrar of the school, Gbadamosi Ojo; and a teacher in the school, Dare Samuel Olutope.

While the four other defendants were present in court on Monday, Adeleke was absent.

His lawyer, Dr. Alex Izinyon (SAN), informing the judge that the governorship candidate not in court because of ill health.

Izinyon said, “His Personal Assistant informed me yesterday (Sunday) that he was indisposed because he was stooling.

“He sent a sent medical report to that effect.”

Izinyon said he had served the medical report, showing his client was on medication, on the prosecution.