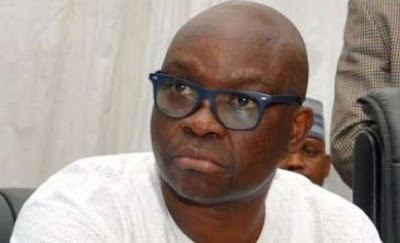 The anti-graft agency may apply for permanent forfeiture of the assets in Lagos and Abuja.

But Fayose, who made a dramatic appearance at the EFCC Abuja headquarters on Tuesday, continued to perpetrate more drama in detention by refusing to write a statement and by rejecting an administrative bail granted him by EFCC

He insisted that he should be taken to court for trial.

He was said to have preference for bail terms given by the court than EFCC.

Also yesterday, the EFCC uncovered a plan for a protest march by Fayose’s associates.

The protesters plan to march on the EFCC office.

Fayose is being detained in connection with the ongoing probe of N4.685billion allocated to some Politically Exposed Persons (PEPs) by the Office of the National Security Adviser (ONSA).

Of the cash, detectives traced N2.0030billion to ex-Deputy Governor Iyiola Omisore, N685million to a former Minister of State for Defence, Sen. Musiliu Obanikoro and N1.3billion and $5.377million (at the exchange rate of N168 to $1) to Fayose.

Both Omisore and Obanikoro had been quizzed. Fayose has refused to cooperate with the anti-graft agency.

According to a source, the commission may approach the court for permanent confiscation of six properties of Fayose to recover N1.3billion and $5.377million allegedly collected by the ex-governor.

Although two other houses were linked with Fayose in Fagbohun Street, GRA, Iyaganku and another near Court of Appeal, GRA, Ibadan, they may be part of a separate trial of the ex-governor in Ibadan.

Another source said: “We may apply for the permanent forfeiture of the six assets traced to Fayose in Lagos and Ibadan.

“The duplex in Osun Crescent was allegedly bought for N200million from the defunct Skye Bank Plc. The one located in Yedseram Street in Abuja was purchased at N270million from a businessman.

“All the houses in Lagos were paid for by Abiodun Agbele, an associate of the ex-governor who is on trial. Agbele allegedly paid over N880million for the properties in Lagos.”

A fact-sheet showed that the duplexes were “acquired within 180 days in office by Fayose”.

Meanwhile, for the second day running, Fayose refused to cooperate with EFCC detectives.

Another source close to the investigation, who spoke in confidence, said: “Our detectives met with Fayose on Wednesday but he refused to cooperate, he was adamant on not writing any statement again.

“Apart from the courtesies accorded him, Fayose was also granted an administrative bail which he rejected. Instead, the ex-governor insisted that he should be arraigned for outright trial which will enable the court to grant him bail. He prefers bail terms from a court to EFCC’s conditions.

“So far, he remains in detention for the second day. But we allowed Fayose access to his counsel and relatives. There is no any intimidation.”

Security has been strengthened at the EFCC Headquarters, following an intelligence report that Fayose’s associates plan to launch a protest and “overwhelm” the agency’s office.

“All appropriate security agencies have been alerted accordingly. Instead of the associates of the former governor allowing the rule of law to prevail, they want to take the law into their hands.

“We will also allow the law to take its course against illegal demonstrators. No one is persecuting him,” the source said.

Fayose’s Media Aide, Lere Olayinka said the former governor has maintained his denial of all the allegations made against him and insisted that he be charged to court.

“Today is his second day in EFCC custody and I can say that his spirit is high and his will remains very strong,” he said.

Olayinka, who said the EFCC must stop subjecting Nigerians to media trial whenever they lack concrete evidence to sustain court trial, added that “the commission has started its usual lies by claiming that it discovered houses bought by Fayose with public fund.”

He said “Nigerians should recall that in 2016, operatives of this same EFCC attempted to seal up a guest house located at Gana Street, Maitama, Abuja, claiming that it belonged to Fayose. Whereas, the building belonged to a retired army general.”

“However, since the EFCC is only being used to settle political scores, it is more comfortable with keeping Fayose in custody so as to achieve the agenda of keeping him out of circulation and embarking on its usual media trial.

“But on this Fayose’s matter, they have picked on a wrong customer and no amount of intimidation, blackmail and harassment will break his resistance to tyranny, agent of which the EFCC has become.”