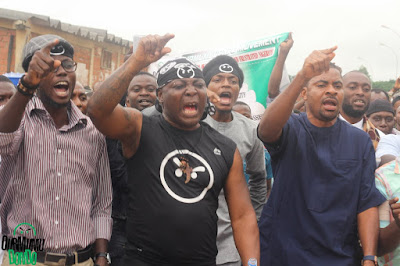 A Federal High Court in Abuja has ordered the Nigeria Police Force, the Inspector General of Police and the Commissioner of Police, Abuja to pay musician, Charles Oputa (Charly Boy) N50million for violating his rights.

Justice John Tsoho, in a judgment on Monday, also ordered the respondents to tender public apology to the applicant, which should be published in two national newspapers.

The judgement was on a fundamental rights enforcement suit by Oputa, marked: FHC/ABJ/CS/343/2018 , filed on March 29 this year.

The applicant had, in an affidavit, said policemen, numbering over 100 from the Federal Capital Territory (FC() Police Command, invaded the Unity Fountain in Abuja on August 8, 2017 and attacked him and his group with teargas canisters, hot water cannon and wild police dogs during the Resume or Resign protest when he led other activists to protest the prolonged absence of President Muhammadu Buhari from Nigeria on account of his medical vacation in the United Kingdom.


He claimed that the attack by the policemen was so severe that he collapsed in the process and was rushed to the hospital.

Oputa claimed that the police attacked them because of claims that their protest over the President’s absence, which had exceeded 90 days on the second day of their daily sit-out protest, had gone international and brought serious embarrassment to the country.

Justice Tsoho, in the judgement rejected the respondents’ claim that miscreants invaded or stormed the premises of the protest. The judge said there was no evidence to support such claim.
s
The judge said the applicant was entitled, under the Constitution, to stage a peaceful protest.

Justice Tsoho noted that protest is a constitutionally guaranteed right, provided it is done peacefully.

He further noted that even if miscreants were on the scene to hijack the protest, the respondents (the police) possess enough measures to dislodge such persons and maintain law and order.

The judge noted that the respondents, in their counter affidavit, admitted that they resorted to using teargas canisters and hot water canon in order to disperse the ’miscreants’’ who suddenly took over the protest.

Justice Tsoho said the respondents’ claim that the teargas canisters and hot water canon were not directed at the defendants lacks substance as teargas circulates and affects all persons around where it is expended.

The judge held that the applicant disclosed a reasonable cause of action against the respondents.

He further held that the respondents violated the applicant’s fundamental rights to dignity of the human person, freedom of expression, peaceful assembly and association as enshrined in sections 34, 39, and 40 of the Constitution.

The judge was of the view that “the law is that the court has the right to grant redress to anyone whose right is violated and the Applicant is entitled to a remedy.”