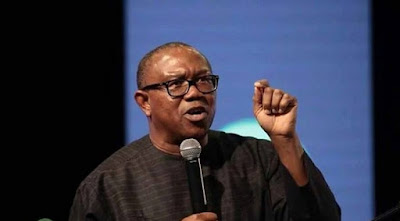 He owns a bank, controls many international franchises in Nigeria and has shares worth billions of naira in blue chip companies — but you are more likely to run into Peter Gregory Obi on a commercial flight than a private jet. You could even meet him sitting comfortably in economy class when he cannot get seats in business. Obi is probably the only Nigerian governor who regularly flew commercial while in office.

The news is that he has been picked as the running mate to former vice-president Atiku Abubakar — the main challenger to President Muhammadu Buhari in the 2019 presidential election. The Atiku-Obi ticket will be on the platform of the Peoples Democratic Party (PDP), the party that lost power in 2015.

Atiku picked Obi because of his business background as he would not want a deputy who would be preoccupied with politics.

Born on July 19, 1961 in Onitsha, Anambra state, the former governor is arguably one of Nigeria’s most successful politicians and businessmen.

To don his successful business career, Obi embraced politics in 2003 when he contested the gubernatorial election in Anambra as the candidate of the All Progressives Grand Alliance (APGA). However, Chris Ngige of the Peoples Democratic Party (PDP) was declared winner by the Independent National Electoral Commission (INEC).

Obi refused to accept the outcome of the election and would not go down without a fight. He challenged the result of the election in court, unwavering, until three years later when Ngige’s victory was overturned by the court of appeal on March 15, 2006. Obi assumed office the following day.

On November 2, 2006, seven month in office, Obi was impeached by lawmakers of the state house of assembly over allegations of impropriety and gross misconduct. Obi was replaced the next day by Virginia Etiaba, his deputy, making her the first ever female governor in Nigeria’s history.

Like before, Obi proved again that he is an unrelenting fighter. He challenged his impeachment and was re-instated as the governor on February 9, 2007 by the court of appeal sitting in Enugu.
Obi would reveal later that he was kicked out of office for refusing to inflate the state’s budget.

“I was impeached in Anambra State, removed from office twice, the first one is because of this budget issue,” he said.

“They want to repair Office of the Governor, which is my office, the approved budget for 2006 was N298 million, I repaired everything with N43.2 million. They said I didn’t do it through due process, because they had awarded the contract.”

His political journey again hit the rocks on May 29, 2007, following the general election which saw Andy Uba declared winner. Obi returned to the court once more, this time contending that the four-year tenure he had won in the 2003 elections only started to run when he took office in March 2006.

In June 2007, the supreme court upheld Obi’s contention and returned him to office. This brought to an abrupt end to Uba’s tenure whose April 14, 2007 election the apex court nullified on the grounds that Obi’s four-year tenure should have remained undisturbed until March 2010.

Obi contested and won his re-election bid in 2010 and went ahead to rule the south-east state for another four years. He defeated Chukwuma Soludo, a professor and ex-governor of the Central Bank of Nigeria (CBN).

On March 17, 2014, Obi served out his second term and was succeeded by Willie Obiano.

‘POLITICS MADE ME POORER’

Politics is often conceived and believed to be a money making venture, where people go to “eat their share of the national cake”.

But Obi said contrary to this belief, he became poorer when he ventured into politics.

He said this in an interview with Vanguard in October 2017, when responding to the allegation levelled against him by Ubah that he demanded N7 billion from Obiano to support his governorship ambition.

Obi denied the allegations, describing it as “sheer blackmail”.

“At this stage of my life, I cannot support anybody for political and personal benefits. I have passed that stage and to do so is to abuse the Grace of God in my life,” he said.

“I did not go into politics wretched; I was already a director in three financial institutions, a director in four other major companies; all by the virtue of my investments. I was also running a successful family business.

“Going into politics even made me poorer but I won’t question anything because that is where God wants me to be.”

One or two pages, and the curriculum vitae (CV) of an average person is comprehensively captured but same cannot be said for Obi.

He was appointed by ex-President Goodluck Jonathan in 2015 as the chairman of Nigeria Security and Exchange Commission (SEC), and named honorary special adviser to the president on finance. In 2011, he was awarded the national honours of the commander of the order of Niger (CON).

THE ‘ONE WRIST WATCH’ SAGA

Obi has often claimed that he sacrificed a life of luxury for an “ordinary” one. Speaking at The Platform, a forum organised by the Covenant Christian Centre, in 2017, the ex-governor said he has only one wrist watch which he said he had been using for 17 years.

“I have said it to Nigerians, Peter Obi wears only black shoes, and I have two pairs, and I travel with them. The purpose of shoe is to protect the leg from being hurt. Nothing else. I bought this from Marks and Spencer, $49.99, finish,” he said.

“They said ‘we didn’t even see watch’, and I have said it to everyone, this is the only watch I have, I have worn it for 17 years. The purpose of watch is to keep time. Why would I keep a watch at home? Whose time is it keeping?”

But Nigerians voluntarily fact checked Obi’s claim and in little or no time, came up with pictures of Obi with different wristwatches adorning his hands. He had no answer to that. Many Nigerians accused him of stretching the facts just to advertise his modesty.

He is known as “aka gum” — one who is extremely frugal such that money is glued to his hands. He does not seem to dispute this as evident in some of his public speeches.

“As a governor, rather than stay in hotels where people pay over N500,000 per night, I stayed in a Hotel I paid less than 50,000. Rather than have a convoy of 20, I had that of five. Rather than maintain over 10 guest houses, I closed them down and restricted myself to the Lodge. Rather than travel on chartered planes, I flew even economy class most times. These are cost-saving measures that we deliberately introduced to keep government going,” he said.

A MAN WITH NO REGRETS

Asked if he has any regrets on his time as governor of Anambra, Obi said he has no regrets about anything in his life.

“I can tell you, at 55, I’ve never been to hospital, except when the doctor said they saw a small growth in my system, they wanted to remove it and I was in hospital for two hours for that. I am married, have a wonderful family with two children, a wife, the best that anybody could wish to have. The things that give some people headache, I don’t have. So, why will I regret in life?”

Obi defected to the PDP in 2014 after serving as governor for two terms under APGA,

If you say Obi does not lose battles, you won’t be far from the truth. But as he assumes a major responsibility of bringing the Igbo closer to the seat of power, all eyes are on him.

Will the 2019 presidential election, perhaps his toughest political battle, be any different?