Atiku vs Buhari: Arewa youths forum discloses who it will support, explains its decision 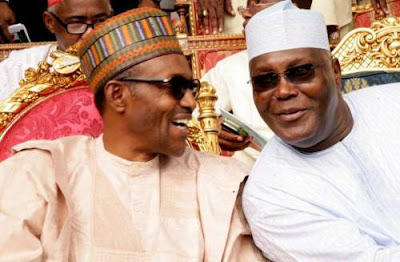 The Arewa Youth Consultative Forum, AYFC, has reacted to the emergence of former President, Alhaji Atiku Abubakar, as the standard bearer of the Peoples Democratic Party, PDP in the 2019 presidential election.

The organization said that the ‘God’ that installed Muhammadu Buhari as president in 2015, will remove him and replace him with Atiku in 2019.

Speaking in an interview with Dailypost on Friday, the President of the Arewa youths, Alhaji Yerima Shettima, also congratulated the PDP and Nigerians for the successful conduct of the party’s National Convention in Port Harcourt, Rivers State, last weekend.

According to Shettima, PDP has demonstrated seriousness and maturity and has shown Nigerians that they were ready to take over power from the All Progressives Congress, APC, a party he described as a mere organization.


Shettima said that although had strongly canvassed for a young president, Atiku was an alternative to the desirable.

“For us, what happened at the PDP (National) Convention was clearly a demonstration of a people trying to sustain the country’s democracy because the conduct, process of how Atiku Abubakar emerged is a clear indication that PDP has demonstrated maturity and seriousness to move the country forward.

“For us, we congratulate them and we congratulate ourselves because democracy has come to stay and that is what has been displayed and we hope Nigerians have seen all they needed to see.

“It’s clear that PDP is now the only party that can give Nigeria what they truly desire. As far as I’m concern, APC’s conducts, attributes and approaches to issues do not in any way portray them in good light to me or to a lot of us because the way they run the party, it is clear that it is more or less an organization owned by one individual or group of individuals and they run it the way they like without going through the processes of a political party.

“Indeed, if you look at Atiku’s antecedent, though I’m one of the people who strongly said we needed a young president, but with the present circumstance, and the present situation of things, and sometimes if you look at what will give you answers immediately, there are steps to go for a long term and there are steps to go for a short term. For the short term, Atiku is the only solution available to us right now. And that’s the only thing we have in our hand, as far as we are concerned,

“And that’s exactly what we’re looking at right now. We must be sure to give him all the necessary support he needs to emerge as president and save this country. He understands what democracy is all about.

“He was part of the struggle and he paid his dues. The God that gave Muhammadu Buhari the election of 2015 will definitely give Atiku 2019. We will do our own and God will decide. Nigerians have suffered a lot.