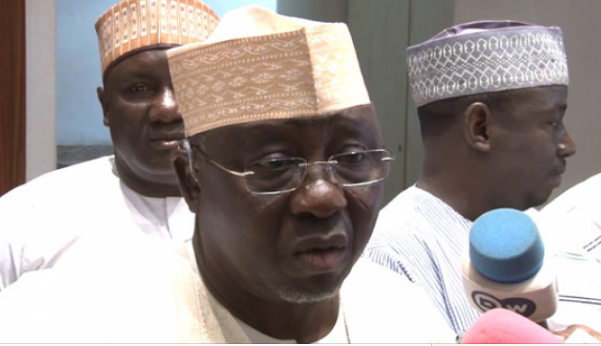 The son of the executive governor of Nasarawa state, Umaru Tanko Al-Makura, crushed six persons with his car in Mararaba Ankunza area of Lafia, Nasarawa State.

Khalid Al-makura, who is alleged to be a habitual hit and run driver – was said to be coming from a local Hausa club ”Lancika hotel” when as a result of over speeding he crashed into six persons which led to amputating three-persons legs and hands who are all receiving treatment in Chida Crescent Hospital, Abuja.

The traditional ruler of the area, Ibrahim Mohammed, who confirmed the accident, said about three persons sustained serious injuries, but there was no record of death.

According to him, aside those whose hands and legs were amputated, other only have minor injuries and are currently receiving treatment in National Hospital, Abuja.

He further explained that when the accident happened, he was called upon to intervene, because, “Some youths wanted to kill the driver, but I insisted and asked the vigilante guards to take him away, which they did before they later hand him over to the Police, while those injured were rushed to specialists Hospital. And the Governor immediately ordered that they should all be taken to Abuja,” he stated.

Also speaking, leader of the vigilante group, Isah Danladi, told TribuneOnline that they narrowly escaped the driver, because the youths in the area wanted to kill him and burn the vehicle, but, “We stood our ground to save him before we later realised that he is Governor Al-makura’s son.

“In fact, if we were not there nobody knows what the youth could have done, because they were angry and ready for jungle justice as they noticed the driver was drunk,” he added.
Before the latest accident, Khalid a graduate of Nasarawa State University, Keffi was described by many as serial hit and run driver that led to the death of about four victims in the last three years on different accident.

For instance, in March 2017, Khalid killed a JSS 2 student of Science Secondary School, Lafia, when he drove and ran into the school gate on high speed at about 7.30 pm exactly the same time the latest incident also occurred.

Though he was arrested and arraigned before a Magistrate court for the killing of the JSS 2 Student, he was later released and allowed to go about his normal life.

Already, the general public and some close by communities in Lafia are now showing concern over the refusal of security agencies particularly the Police and Federal Road Safety Commission (FRSC), to put a stop to the ugly trend by the son of the number one family in order to prevent further occurrence

A source revealed that Governor Al-makura has placed Khalid on serious checks and has directed that no vehicle should be allowed to be kept in his custody to prevent further backlash against the first family of Nasarawa State.

Another source also confided in our correspondent that Khalid is presently in hiding to prevent any negative action against him by his father.

The Police in Lafia is still silent over the issue, as the State Police Public Relation Officer, John Idrisu Kennedy, declined comment and said: “I am not to comment on this,” when journalists visited him.