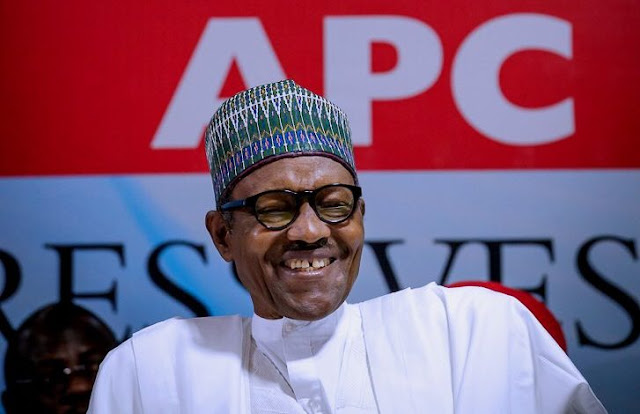 The All Progressives Congress (APC) has endorsed the nomination of President Muhamadu Buhari as the Presidential candidate of the party for the 2019 general election.

About 7000 delegates from across the 36 states and the FCT participated in the exercise which took place at the Eagle Square in Abuja.

A lot of journalists were trapped outside the square for a long time as non accredited delegates and sponsored supporters from states struggle to find their way in.

Outside the square, traders had a field day doing brisk business, while fake copies of the APC constitution was on sale to unsuspecting delegates in the name of amended constitution.


Senator representing Kaduna Central, Senator Shehu Sani told newsmen that the support given to the President across the country is a vote of confidence on his ability to pull the nation out of the wood.

He expressed confidence that despite the challenges facing the party, the President has the overwhelming support to win the 2019 general election.

Senior Special Assistant to the President in Political matters, Hon. Gideon Zamani praised efforts of the President at rebuilding the country, pointing out that the overwhelming endorsement of the President by Nigerians was a vote of confidence on his leadership.

Zamani told newsmen at the convention ground that President Buhari has, in the last three and half years been able to stabilised the Nigerian economy, creating an enabling environment for Nigerians to engage in meaningful business.

He gave example of the Anchor borrower program which he said has transformed the agricultural sector, turning Nigerian farmers into multi millionaires.