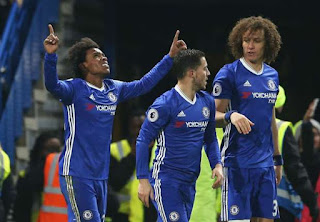 
William have been seriously linked with a moves to Manchester United and Barcelona before the transfer window closed.

Barcelona made two offers which was rejected by the Blues, while the Red Devils were said to be considering a bid.

The 30-year-old has now dismissed speculation that he wanted to leave Stamford Bridge, adding that he wants to remain at the club for ‘as long as possible’.

“A lot of people say a lot of things in the press, but I never said that I want to leave Chelsea, never,” Metro UK quoted him as saying.

“Always I say that I want to stay at Chelsea as long as possible, and I am happy to stay here.

“When I arrive here my plan was to stay here as long as possible and now I am here five years I hope stay five more!

“I know I have two years of contract left but I hope to stay more years in the Premier League.

“I am very happy to be here five years. I have won titles and played a lot of games with a lot of happy moments, and a few sad moments as well but that is part of football.

“But these five years have been very good for me and I am proud to be a Chelsea player.” Willian said.