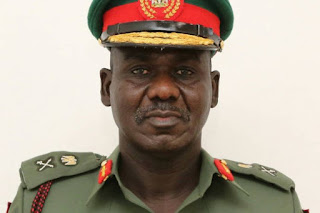 The Chief of Army Staff, Lt-Gen.Tukur Buratai, has said that the war against terrorism required collective support of all Nigerians to consolidate on the victory recorded.

Adeyemi-Akinleye said Buratai stated this while speaking as the Special Guest of Honour at the 50th Anniversary and International Conference held at the main campus of Ahmadu Bello University (ABU), Samaru, Zaria, Kaduna State.

The conference with the theme: “National Question, Security and Governance in Nigeria”, was organised by the Department of Political Science, ABU, Zaria.

Buratai, represented by the Commandant, Depot Nigerian Army, Zaria, Maj-Gen. Victor Okwudili-Ezugwu, said the fight against terrorism should not be the sole responsibility of the security agencies.

“The war against terrorism is a collective responsibility, every individual or organisation must be supportive of government efforts and that of the security agencies to rid the country of criminality and security challenges, ’’Buratai said.

Reflecting on the theme of the conference, Burai said, “Good governance is all about effective and transparent leadership that produces result which transforms the socio-economic conditions of a nation.