US bodies predict electoral violence in Lagos, Rivers, Kano, others 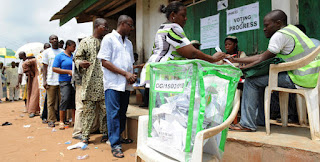 The United States Institute for Peace and the International Republican Institute have said Lagos, Rivers, Anambra, Adamawa, Ekiti, Plateau, Kano and Kaduna, may erupt in electoral violence during the 2019 elections.

The institute in a report co-sponsored by Fund For Peace, Middle East and Africa Centre and other international organisations, stated that social and economic inequalities, ethnic and religious divisions, and corruption contributed to the risks of electoral violence in the country.

They noted that violence might erupt in the states during the forthcoming general election if not properly managed.

In a ‘Special Report on Preventing Electoral Violence in Nigeria,’ presented in Abuja on Thursday, the international bodies posited that the challenge required innovative approaches on account of the shift in the dynamics of violence since the last elections in 2015.


The report said, “In addition to the broad trends and shifts identified earlier in the report, the eight states’ profiles that follow illustrate the distinct combination of risks faced in different parts of Nigeria across the country’s various political zones.

“While not intended to be exhaustive, these profiles demonstrate the diversity of challenges across the country.

“They clearly show the limitations of pursuing a single strategy to mitigate electoral violence and argue for adaption and innovation, on a state-by-state basis.”

The report further revealed that public confidence in the Independent National Electoral Commission for credible elections was low, stating that the electoral umpire would benefit a lot from a transparent result management and staffing reforms.

It further predicted that grievances arising from recent local government elections might also have significant consequences for the national elections.

It suggested that successful state-level initiatives in Plateau State would tamp down on religious intolerance.

The Programme Director, Fund For Peace, Patricia Taft, added that the findings showed that pre- and post-election conflicts were usually orchestrated, and not spontaneous as they appeared.

She said the active involvement of the civil society and Non-Governmental Organisations as peace brokers should be explored to build trust in the polity.

The agencies unanimously called for greater attention to be paid to preventing violence at the local level, and strong will from political parties to consciously prevent violence.

In his remarks, the Convener, Centre For Peace and Development, Jibril Ibrahim, warned against the circulation of fake news, adding that unverified stories were responsible for most of the conflicts recorded in recent times.

The police could not be reached for reaction as the force spokesman, Jimoh Moshood, did not respond to calls. He had yet to reply to a text message as of the time of filing this report.