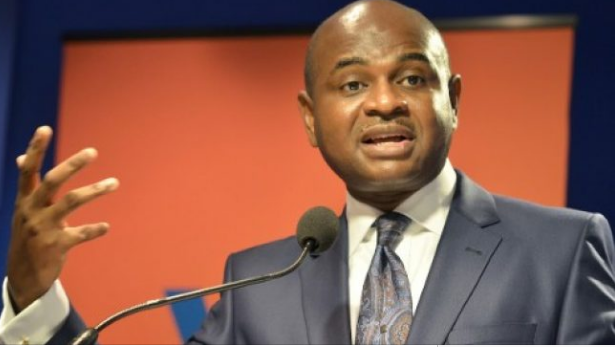 Ian King, a UK business analyst and Sky News presenter, has described Kingsley Moghalu as the most intriguing candidate in the 2019 presidential election.

A former deputy governor of the Central Bank of Nigeria (CBN), Moghalu is seeking to unseat Buhari under the platform of the Young Progressive Party (YPP).

Among his key manifestos are fight against poverty and unemployment, as well as moving the economy away from dependence on oil to more innovative policies.

Writing on The Times of London on Tuesday, King said Moghalu is Nigeria’s “self-styled” Emmanuel Macron — French President — who has presented himself as a “thoroughly modern presidential candidate.”
According to him, “Mr Moghalu’s policy prescription also includes more infrastructure investment. He accepts that while Nigeria has benefited from the process of “leapfrogging”, where a lack of landlines has encouraged rapid take-up of mobile technology and a lack of established electricity grids has enabled the rapid adoption of off-grid solar power, that can go only so far: ‘“Nigeria, in particular, has a very high level of mobile phone technology and that’s a good thing, but I don’t think you can apply leapfrogging to every aspect of development.

“The would-be president also has controversial views on Chinese investment in Africa. He says that many African nations have not benefited as they should have done, arguing that a lot of the continent’s leaders have lacked the “intellectual soundness” to drive a harder argain with the Chinese.”

Moghalu is one of those who believe China has exacerbated debt traps around Africa and increased dependency on foreign loans.

King further said believing that Nigeria’s education and legal systems “prevent too many women from reaching their potential”, Moghalu has promised a 50-50 gender balance in his ministerial appointments.

“But is Nigeria ready for a technocratic president?,” he asked.

“Mr Moghalu, who points to his work nation-building in Rwanda, Angola and the former Yugoslavia during his time at the UN, insists that it is.

“Many will wish him luck. If this is to be the African century, the continent’s biggest country must fulfil its economic potential. If it does not and poverty continues to grow, the chances are that an increasing proportion of Nigeria’s growing population will head elsewhere, adding to the global migration crisis.”