Project commissioning: I will invite Buhari but he won’t come – Wike


Rivers State Governor, Nyesom Wike has said President Muhammadu Buhari would be invited to commission projects in the state, even though he is unlikely to honour the invitation. 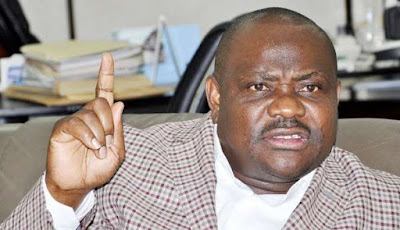 Governor Wike who spoke in an interview with newsmen in Port Harcourt, said he will invite the President in October for the commencement of another leg of project commissioning in the State.

He noted that contrary to what he called the propaganda of the APC, he was not against the Federal Government.

He said that he was only committed to the fight against injustice, adding that the APC Federal Government had been plotting insecurity.

Wike claimed that the APC and the Federal government had been holding sinister meetings on how to take Rivers in 2019.

“I was not here in 2007. Rivers State Government went to court against the EFCC to say the commission has no constitutional power to interrogate the finances, the expenses of the State Government. And the matter was adequately addressed and judgment was given against EFCC. Since 2007, EFCC has been struggling to appeal the judgment. EFCC has not succeeded up till now. What they are doing now is when they feel a government is not pro-Buhari, let’s do this.

“Nobody will appear before the EFCC until they follow the rule of law. This country must not allow personal interest of individuals. That is a coup against the interest of Nigeria. No wonder the EFCC will go to Benue State and seal the account of the State Government. No wonder EFCC will go to Akwa Ibom State to seal the account of the State Government”, he said.

“All their meetings, all their gatherings at the Federal Level, whether by hook or crook, they must have Rivers State. They want to use soldiers, SARS, DSS. All cries by the international community don’t matter. Just take Rivers State first.

“It is unfortunate for people who don’t have a sense of history. Mr Mbu was not here when I was elected governor”, he said.