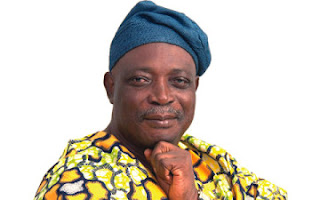 
Madaki, an Economic and Financial Crimes (EFCC) operative, gave evidence in the trial of Ladoja and his erstwhile Commissioner for Finance, Waheed Akanbi, for alleged N4.7 billion fraud.

The defendants were arraigned before Justice Mohammed Idris on December 14, 2016, but they pleaded not guilty to the eight-count charge preferred against them by the EFCC.

The judge had granted the two men bail.

Madaki alleged that Ladoja instructed the second prosecution witness (PW2), Mr Wale Atanda, to buy 26 cars valued at N80 million for 14 legislators who were loyal to him in the House of Assembly from the state government’s (OYSG) account.

During the cross-examination, Onilenla asked the witness: “Take a look at Exhibit H25, the requested vehicle information for the cars, what is the date on it?”

Onilenla also asked the witness to confirm that the transaction on the cars was unrelated to the sales of Oyo State shares, to which he answered in the affirmative.

The lawyer then asked the witness: “Are you aware that the vehicles were given to the legislators on lease?”

The witness said: “There is no statement showing they paid for them, only Ladoja paid N5 million when the bank began to request for the money.”

Onilenla asked: “Are you aware that the legislators entered into agreements with VT Leasing Limited to pay for the cars by instalments?”

The witness said: “I am not aware of any agreement.”

Onilenla sought to tender the agreement documents, all of which were photocopies except the agreement between VT Leasing Limited and Mr Olayemi Busari.

The EFCC prosecutor, Mr Oluwafemi Olabisi, objected to the photocopies tendered, contending that they were not original copies.

But the court admitted and marked them as Exhibit H32.

Continuing his cross-examination, Onilenla said: “On the issue of the 600,000 pounds, did you investigate the bureau de change that was allegedly used?”

The witness said: “The daughter of the first accused was the beneficiary. She admitted getting 100,000 pounds and not 600,000 pounds. So, there was no need.”

Onilenla also asked the witness: “On the purchase of the armoured car, are you aware that Atanda bought the car for Ladoja on the supposition that he wanted it without asking him?”

Onilenla then asked: “Why then did you not investigate how an individual was able to purchase a car for the government without following due process?”

The witness said: “We did not investigate that.”

Onilenla told the court that he needed to produce more documents to enable him finish his cross-examination and prayed the court for an adjournment.

Justice Mohammed Idris adjourned the case until September 7 for continuation of trial.