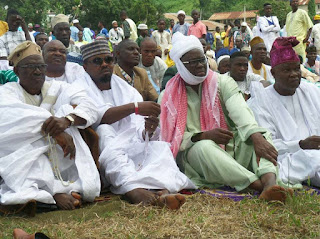 Some Islamic groups have called on federal and state governments to declare the first day of the Islamic calendar as a public holiday.


In separate Hijrah messages to mark the first day of the Islamic calendar, the groups said declaring Muharram 1 as public holiday would be in line with fairness and justice to Nigerian Muslims.

Others were Muslim Consultative Forum (MCF), Federation of Muslim Women in Nigeria (FOMWAN) and Muslim Students’ Society of Nigeria (MSSN).

The groups said that declaring Muharram 1 as public holiday would also give Muslims a sense of belonging.

“Muharram 1, in the Islamic calendar, is equivalent to January 1, which is observed as a public holiday in Nigeria.

“Muharram 1, is our own January 1, we want both the federal and state governments alike to declare it as such in the interest of religious harmony in the country”, said MMPN President, Abdurrahman Balogun

UNIFEMGA, in a message signed by Abdulwaheed Odeyimka, its National President, called on the government at various levels to recognise the Hijrah calendar and use it side by side with the Gregorian calendar.

It congratulated Muslims and non-Muslims alike for witnessing another new Islamic year and urged them to reflect on their deeds and activities during the past year.

Odeyimka also demanded an end to the strikes in the education sector in the interest of the students and educational advancement in Nigeria.

In his message, Alhaji Ishaq Sanni, Chairman, Muslim Community of Oyo State, said the recognition of Hijrah was long overdue and called for its immediate implementation.

Sanni called on the leadership of Nigerian Supreme Council for Islamic Affairs (NSCIA) to enter into dialogue with the Nigerian government on the issue.

He commended the bold steps of governors of Oyo and Osun states in recognizing the first day of new Islamic year by declaring it work free day and urged other states in the South West to emulate them.

FOMWAN, through its National leader, Halimah Mustapha, called for stringent legislation against rapists, saying it was getting too rampant in the country because culprits got a slap on the wrist.

The Muslim women also decried the ban on hijab in some government schools in line with the dictates of their faith as enshrined in the Nigerian constitution.

They equally commended Federal government for restoring religious studies in schools curriculum, saying such would assist in reducing moral decadence among students.

On its part, the Muslim Consultative Forum (MCF) implored Muslims to rededicate themselves to the cause of building an egalitarian society by joining hands with other Nigerians in moving the nation forward.

MSSN National President, Dr Taofik Yekeen, urged politicians to play politics according to the rules and warned Muslim students against being used by desperate politicians ahead of 2019 elections.