Acting Chairman of the Economic and Financial Crimes Commission (EFCC), Mr Ibrahim Magu, says politicians defecting from one party to another would not be shielded from prosecution by the anti-graft agency. 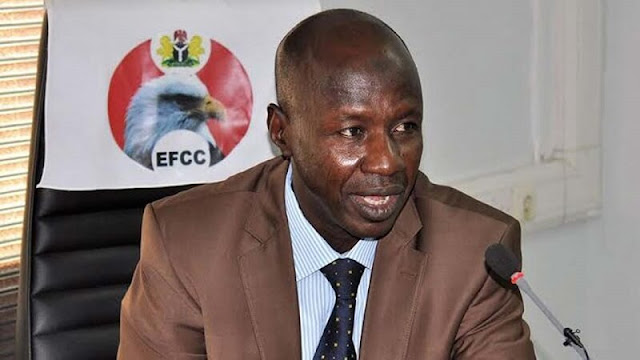 Speaking during a parley with editors in Lagos on Wednesday, Magu said there was no hiding place for such politicians in the fight against corruption by EFCC.

Responding to alleged interference by the ruling All Progressives Congress (APC), Magu said that he had never received any instruction to stop any investigation.

“The fact that a politician jumps from one party to another will not stop EFCC investigation; we don’t stop investigation until it is concluded.

“It is only the courts that have the powers to decide on whether to exonerate or convict any indicted politician.

“I am not the type you’ll ask to stop any investigation”, Magu said.

The EFCC chairman said it had become fashionable for anyone being investigated for corruption by the Commission to scream political persecution.

“With the general elections fast approaching, the resistance has assumed even frightening dimension with political motives imputed to most of our activities,” he said.

According to Magu, the media owes Nigeria a duty not to allow the corrupt to deploy their ill-gotten riches to corner the machinery of government.

The EFCC chief, therefore, urged the media not to lend their platforms to helping the cause of the corrupt that were shedding crocodile tears.

“We must all do what is right for our country, which is ensuring that those who steal our common patrimony are brought to justice,” Magu said.

According to him, the EFCC had so far revealed only about 10 per cent of the monumental corruption perpetrated in the past and urged all security agencies to prioritize anti-graft fight.

“You have not seen anything yet, we have not even touched 10 per cent of corruption perpetrated in the past,” he said.

The EFCC boss said banks needed to strengthen internal control and urged the Central Bank to re-appraise regulatory and ethical conduct of banks in order to win the fight against corruption.

According to him, EFCC has signed memorandums of understanding with the United Arab Emirates and Mauritius in its efforts to recover looted assets.

He expressed concern at the state of seized assets which were rotting away at various locations across the country.