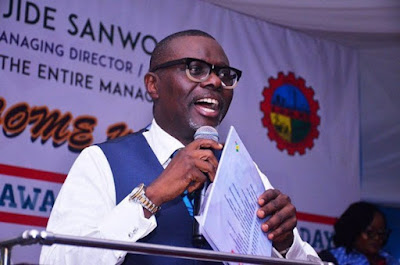 About 377 ward chairmen of the All Progressives Congress (APC) in Lagos State have endorsed Mr. Babajide Sanwo-Olu for the governorship ticket.


They announced their support for the former Establishment & Training Commissioner ahead of next Saturday’s primary election.

Also at the weekend, former Lagos State House of Assembly Speaker Adeyemi Ikuforiji urged Ambode’s kinsmen in Epe to pray for the governor to clinch the APC ticket at the scheduled direct primary.

Ikuforiji spoke in Epe during the Kayokayo festival.

At a meeting involving Sanwo-Olu, some party leaders and the grassroots mobilisers at Martino’s Hall, Ikeja, the chairmen, under the auspices of Conference of Ward Chairmen, promised to ensure Sanwo-Olu’s victory on Saturday.

Shola Oshobajo, who spoke for the chairmen, assured Sanwo-Olu of his members’ support before, during and after the primary election.

The Director-General of the Babajide Sanwo-Olu Campaign Organisation (BOSCO), Mr. Tayo Ayinde, described Sanwo-Olu as a party man, who will not abandon the party and its members if elected the governor.

He enjoined the conference members to mobilise all party men and women in their individual wards to come out in large numbers and vote for Sanwo-Olu as the APC candidate.

APC chieftain Cardinal James Odunmbaku told members of the Conference not to despair, emphasising that a Sanwo-Olu-led government will be a listening and an inclusive one, especially for members of the party whose input will be paramount and will form part of decision making process.

Sanwo-Olu thanked them for the confidence reposed in him and promised not to disappoint them when he gets to power.

He reminded the grassroots politicians of his role as a fund raiser for the party in most of the elections held in the past.

At the festival in Epe, Ikuforiji urged the people to be calm and support the governor in prayers for him to be successful in the re-election bid.