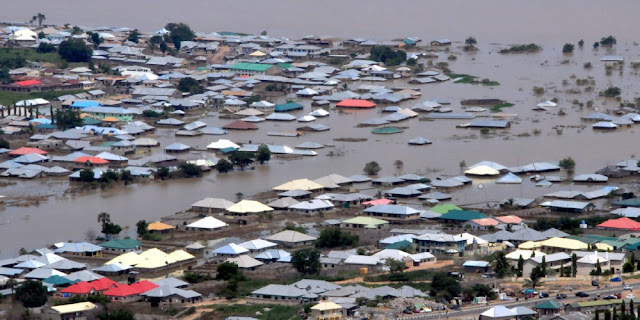 Eleven more people have been killed by flood in Jigawa State in the last one week.

This figure brings to 32 the number of deaths caused by flooding in the state over the last few weeks.

Fourteen local government areas of the state are affected by the disaster.

Hundreds of more residents of Lokoja, the Kogi State capital ,have also been rendered homeless by flood.

The situation is not better in Delta and Anambra States,both of which were visited on Thursday by Vice President Yemi Oshinbajo to enable him personally assess the havoc done by the flood.

The commissioner who stood in for Governor Badaru Abubakar told reporters after an inspection visit to Auyo town and Internally Displaced Persons camp said :”11 people died between Tuesday and Friday. In Auyo town three people died while others were in Kaugama, Malam Madori and Kafinhausa local government.”

Thousands of people have been displaced from their homes,he said.

Livestock and other property,including 100 hectares of farmland, estimated at billions of naira were either washed away or submerged.

The state government has established 16 camps to accommodate flood victims across the state.

Usman who doubles as chairman of the emergency and relief committee said:”We have evacuated the victims and move them temporarily to some schools and other government buildings.

“We have also provided food items, drinking water and other relief materials to manage their lives before the next line of action.”

The commissioner appealed to the federal government ,individuals , corporate organisations and professional bodies to assist the flood victims with foodstuffs and other relief materials.

More residents of Lokoja, the Kogi State capital and other parts of the confluence state, have been forced out of their homes as rising water levels continue to encroach on residences.

The situation could worsen if water from the Lagdo Dam, in Cameron, is released.

In Adankolo, residents whose homes have been submerged by the flood, continue to move out in droves, while others yet to be affected, are not taking chances.

Shops and other commercial buildings are also affected by the flood.

The state government has commenced the distribution of foodstuffs and other relief items to the flood victims in IDPs camps across the state.

The Kogi State Commissioner for Environment and Natural Resources, Sanusi Yahaya, told newsmen at the commencement of the distribution in Lokoja, that the sharing of foodstuffs was the first stage.