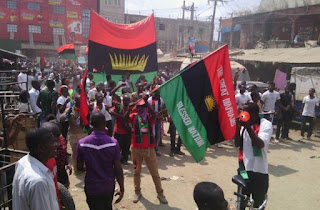 The Indigenous People of Biafra, IPOB, on weekend, condemned the Federal Government for allegedly invading the country home of their leader, Nnamdi Kanu again through security agencies that have been parading Afaraukwu Village Square, Umuahia, Abia State.


According to a statement signed by IPOB’s media and publicity secretary, Emma Powerful, “the second invasion of Afaraukwu is tantamount to a siege on the entire South East.”

The group pointed out that the siege at Afaraukwu showed that Nnamdi Kanu is the only person the Sokoto Caliphate fears and detests more especially now that IPOB has called for a sit-at-home on September 14, 2018 in commemoration of the first invasion of the village last year.

“It also points out that they are being pushed to resort to arms confrontation with the military, whereas they are a peaceful organisation bent on actualising Biafra  sovereignty without violence.”

The terse statement read: “the global family of the Indigenous People of Biafra, IPOB, condemns in its entirety, the second invasion of our leader’s village at Afaraukwu, Umuahia, Abia State. What a combined team of Navy, Army, Police, Immigration and Civil Defence Corps   are doing, parading intimidatingly at Mazi Nnamdi Kanu’s village square, nobody can tell. We know this is another military over-reach by the Fulani controlled hierarchy of the Nigerian defence establishment.

“This is a clear confirmation that the entire east is under siege for no apparent reason other than the need for Fulani caliphate to prove their dominance over the rest of Nigeria.

“Isiama Afaraukwu, it seems, is now the favorite exercise range of the Nigerian military. What this confirms is that Nnamdi Kanu is the one person the Fulani caliphate is most terrified of. It is a shame the corrupt political class, blinded by their own selfishness and petty jealousy cannot see it.

“We are alerting the world that this blatant provocation is one of the many reasons why we have called for a nationwide strike on the 14th of September 2018, to protest this Arewa Islamic military occupation of Biafraland. Biafrans are peaceful people but this unfortunate invasion of our villages and the home of our leader in this 2018 may result in unintended consequences.”

“Innocent Biafrans abducted and murdered in cold blood during September 2017 Operation Python Dance 2 are yet to be buried and here we are in 2018, suffering the same fate. The very quiet Afaraukwu Ibeku community in Umuahia, Abia State now has more military presence and activity than Sambisa forest.”