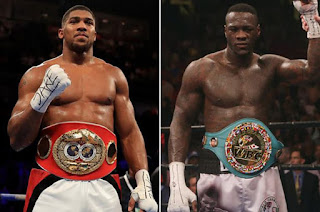 Former heavyweight champion, Evander Holyfield has been comparing the possible duel between Anthony Joshua and Deontay Wilder to his scraps with Mike Tyson and says the fight can bring the heavyweight division back to its prime.

If Wilder beats Fury as expected, a monumental showdown with Joshua, the type never seen since Holyfield twice beat Mike Tyson in the nineties, awaits the world.

Holyfield had this to say on the subject in Jeddah, Saudi Arabia, on Wednesday, where he is attending Friday’s World Boxing Super Series (WBSS) super-middleweight final between George Groves and Callum Smith.


“When boxing was going down Mike Tyson was the one who brought it back by knocking everyone out,” he said. “Everyone wanted to see who could handle that, and I was that guy.

“Now Joshua is a good fighter, knocking people out and everyone wants to see that. He’s got all these people, 100,000 people coming to his fight and that’s the first time in my life I’ve ever seen boxing draw so many people.

“Deontay isn’t skilful, but he can knock people out, and people want to see that too.

“I truly think they are,” he answered when asked if they could bring the division back to its prime.

“Boxing never died, you just got to understand that it’s not the most organised thing. If people actually came together and did it right it would probably be the biggest sport in the world but it hasn’t ever been done properly.”

Asked who would win a potential mega-fight between the two, Holyfield replied: “I don’t know. I think it will be a great fight, you’ve got one guy in Joshua who is a good classic boxer, but another in Deontay who knows a little but can do it well.

“It will all come down to personality and confidence to do what they know they can do. In that situation it’s about who’s willing to step it up a little more, and that’s on Deontay. Joshua is a good fighter and at any given time he knows what to do and can probably do it.

You just never know, boxing is a mind game and the person with most confidence can will their way up and do a lot better than people think they can be.”

As for Joshua’s chance of doing that, he said: “It’s in him. When you draw that many people it can be a good thing or a bad thing.”