9:29 AM Mystique 0 Latest News in Nigeria 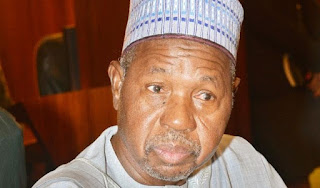 Following the expiration of the continuous voters registration, CVR, by the Independent National Electoral Commission, INEC, Governor Aminu Masari of Katsina State has appealed to the commission to extend the exercise to enable eligible voters register and partake in the 2019 general elections.


Masari made the appeal when he inspected one of the registration centres in Katsina Local Government Area at the expiration of the two weeks extension deadline of the exercise.

INEC had slated August 17 as deadline for the exercise, after which it extended the deadline by another two weeks that elapsed on August 31.

The governor expressed fears that even with the two weeks registration extension deadline, many eligible voters may be denied the right to exercise their franchise during the general election.

According to him, “all the prospective voters I saw on the queue were young people.

“I think most of them are just turning 18 and I am impressed by this large turnout because it shows how serious people are to express their franchise during elections.

“But with the pace at which they are being registered, I doubt if INEC can cover the large crowd of people I see trooping to the registration centres. So I appeal to INEC to extend the deadline for the voter registration.”

However, the INEC Resident Electoral Commissioner, REC, in the state, Alhaji Jibril Zarewa, said: “We assure that it will not close until everybody is registered. We are not going to send anybody away.

“Now, the suspension of CVR is not stoppage of the process. It is to allow for the processing of the voters cards.”