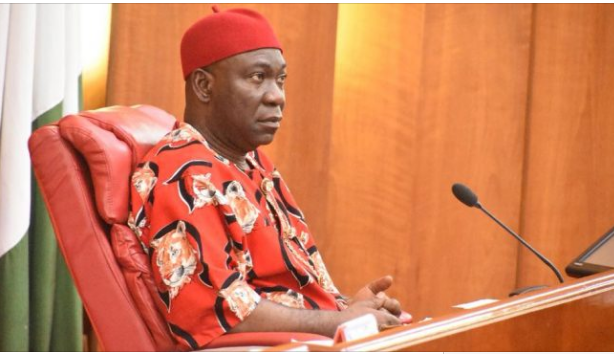 The Deputy Senate President, Ike Ekweremadu, Tuesday passed a vote of no confidence on the Independent National Electoral Commission, INEC, saying the electoral body was recording a fast decline.

He also said that the syndrome of vote buying and perceived misuse of security agencies would be the major challenges of the 2019 general elections.

Ekweremadu stated this in Abuja when he received a joint high-level delegation of the International Republican Institute, IRI, and the National Democratic Institute, NDI, Washington DC, USA, on a preliminary visit to Nigeria ahead of its planned Joint International Elections Observer Mission during the 2019 general elections.

These reactions followed the declaration by INEC that the Osun governorship elections held last Saturday was inconclusive.


According to Ekweremadu, “The fast-declining independence of the election management body as well as vote-buying syndrome and misuse of security agencies are the major problems ahead of the 2019 general elections. INEC is fast declining and descending into the arena.

“Prior to 2010 electoral reforms, INEC was barely independent. It was the 2010 Electoral Act and Constitution amendments that deepened the independence of the electoral body and strengthened the electoral system as evident in the 2011 and 2015 elections.

“Unfortunately, as we head towards 2019, there have been a lot of challenges, particularly the challenges of implementing the existing laws; and this has taken us back to where we were, instead of making progress.

“INEC needs to exercise the independence conferred on it by previous electoral reforms to be able to stand its ground, irrespective of whoever or whichever party that is in government, whether APC or PDP. It should not tend towards the government that is in power.

“Looking at Osun State, for instance, an election took place, somebody won from the results declared at the polling units, ward collation centres, local government collation centres, and the state collation centre. But contrary to the provisions of our electoral laws, INEC has asked the people to go back and repeat some of the elections. That is completely unacceptable.

“Ironically, just recently, we had instances where similar situations arose in both Kogi and Bauchi, among others, and winners were declared,” the lawmaker added.