Details of the meeting between the National Chairman, Peoples Democratic Party, PDP, Uche Secondus, governors of the party and presidential aspirants, which held Tuesday night have emerged. 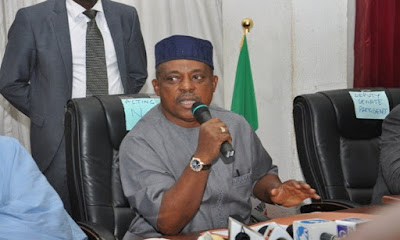 The meeting took place at the residence of the Governor of Ekiti State who doubles as Chairman of the PDP Governors Forum, Ayodele Fayose in Abuja.

Speaking, Fayose, who presided over the meeting, was said to have told the aspirants to remain united ahead of the primary scheduled for October 5 and 6.

He appealed that aspirants should accept the outcome of the primary in good faith and support whoever eventually emerges.

He noted that it would have been better if the aspirants could produce a consensus presidential candidate, Fayose said the governors would respect their decision if they all wanted primary.

In his remarks, Secondus, assured the governors and the aspirants that the members of the National Working Committee of the party had no favourite contender.

Commenting after the meeting, Saraki told reporters that: “We just concluded a successful meeting of PDP presidential aspirants with the party leadership and state governors.

“I am proud of the level of collaboration, commitment and camaraderie amongst all those in attendance.

“There was a general determination and commitment to ensure that the party holds successful, credible and transparent presidential primaries that Nigeria will be proud of.

“We remain a happy family — flying the flag of democracy!”