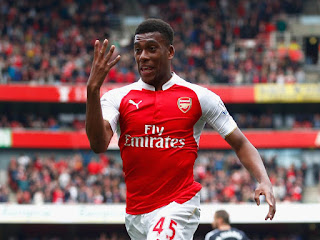 Iwobi was rated as one of the best players after his team’s Europa League victory over FC Vorskla Poltava last Thursday.

He also showed class when he came on in the second half for Pierre-Emerick Aubameyang win vs Everton at the weekend.

Iwobi has been encouraged by Koscielny, who has listed four qualities of the winger and also mentioned his two shortcomings.


”He [Iwobi] has huge potential and he needs to realise how good he could become,” Koscielny told Arsenal website.

”Right now, he is definitely on the right path to do just that. He is working hard at training and his confidence is high since Unai Emery arrived.

”If you look at him he has everything. He is strong physically, quick, good technically and his movement is good. He needs to be more efficient and clinical so he scores and assists more.

”He is very receptive and listen to advice so I have no doubt that he will continue his progression.”

Since playing his first game for the Gunners in 2015, the Nigerian star has been directly involved in 30 goals (10 goals, 20 assists) in 102 appearances in all competitions