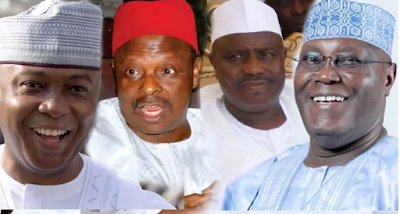 The Peoples Democratic Party, PDP, has said that it would pick its presidential candidate not minding if the individual has corruption case or not.

Speaking with the Sun, the National Publicity Secretary, Kola Ologbondiyan, said the party will not choose its candidate on the basis of whether or not they have graft cases.

Ologbondiyan also said no member of the party can bring such issues to the table or ask the party to drop aspirants with corruption cases.

The PDP mouthpiece maintained that the party would be guided by the provisions of the 1999 Constitution (as amended), as well as its rules in screening presidential aspirants.


He was reacting to reports that the party was planning to drop some of its presidential aspirants with cases of corruption with the Economic and Financial Crimes Commission, EFCC, and related agencies.

He said the Supreme Court had ruled in the past that anyone who has not been convicted in the court cannot be barred from participating in an election.

He said “Please, don’t bring that to us, it is not in our party. Nobody in our party told you that.