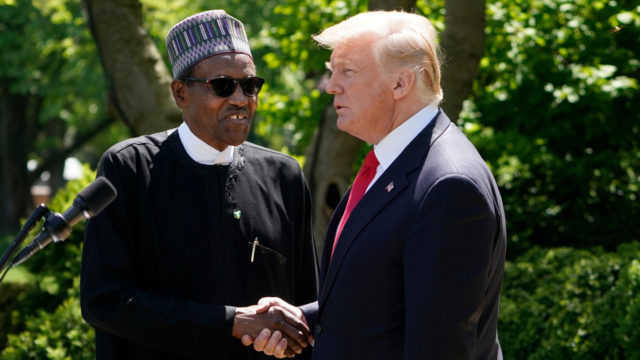 Supporters of President Muhammadu Buhari yesterday rose in his defence following a report quoting sources close to United States President Donald Trump as describing his meeting with Buhari as “lifeless.”

But opponents of the President took advantage of the report to castigate him.

He said: “Nigeria has a reputation for very massive corruption. I also know that the President has been able to cut that down very substantially.”

In one of the photographs of the meeting released by the White House, Trump was seen standing behind Buhari, laughing as the Nigerian leader was signing a document.

But an article titled: ‘Africa looks for something new out of Trump,’ in Financial Times yesterday said: “The first meeting with Nigeria’s Muhammadu Buhari ended with the U.S. president telling aides he never wanted to meet someone so lifeless again. The report quoted “three people familiar with the matter,” as saying so.

Chairman of the Presidential Advisory Committee on Anti-Corruption (PACAC), Prof Itse Sagay(SAN) and spokesperson of the President Buhari’s Campaign Organisation, Mr Festus Keyamo (SAN) dismissed as fake news the slur remark credited to Trump. Prof Sagay said he did not believe Trump could have made the “irresponsible comment”. He alerted Nigerians to be wary of fake news being peddled on the social media.

He said: “How could the U.S. President say Buhari as lifeless? I don’t believe President Trump made such irresponsible comment. If the source of the comment in question is social media, I won’t waste time on it. It is all lies; it is fake news. I hardly react to fake news being peddled on social media. I don’t believe any right-thinking person would see President Buhari and say he is lifeless. Only a mad man would have made such comment being ascribed to the U.S. President.”

Keyamo said Buhari won’t react to social media conjecture, pointing out the comment could not be traced to the official information sources of the U.S. government.

Keyamo said: “There is nothing to say about the uncharitable comment being credited to President Trump. For now, the alleged comment did not come from the official information sources of the United States (U.S.) government or its embassy in Nigeria. We regard it as fake news. In my capacity as the spokesperson of President Muhammadu Buhari’s campaign organisation, I cannot react to unconfirmed statement. We react only to verifiable statements, not fake news.”

But the White House has not confirmed that the President made the statement.

The Buhari Media Organisation (BMO) said President Buhari would not be distracted by the alleged derogatory remarks but will remain focused on his mandate to deliver on his promises to the Nigerian people.

Describing the comment as disrespectful, Chairman of the group, Mr. Niyi Akinsiju and Secretary Cassidy Maduekwe, said in a statement that whether it was indeed said or in fact unsaid, Buhari would in his character continue to remain focused on his mandate to deliver on his promises to the Nigerian people.

The group said: “President Muhammadu Buhari is fit and capable to run for the 2019 elections and oversee the affairs of the country for four more years President Donald Trump’s hate speech notwithstanding.

“We are aware that President Trump’s disrespect for World leaders is not new; his comments on Canada’s Prime Minister, Justin Trudeau, calling him ‘meek and mild’; his reference to Germany’s Leader, Angela Merkel’s actions as ‘insane’, or his outlandish Tweet at the UK’s Theresa May, and more recently, the alleged remarks he made after meeting President Buhari.

“It is indeed not the first time President Trump would be heard to lower the standards of respect for his colleagues on the world stage. We are not surprised; we know that this age-long character of the U.S. President would not change anytime soon.

“But it is important that we put it on record that President Buhari remains fit and sprightly, even for the next decade.

“We recall that during President Buhari’s visit to Trump in the White House, the U.S. President commended the successes that the Buhari administration had recorded especially in the fight against insurgency and the war on corruption.

“The U.S. President was full of admiration for Nigeria’s President during the visit, thus such outlandish remarks as reported by the Financial Times are not just to be taken with a pinch of salt but are untrue in themselves.

“President Buhari has continued to show fitness and capacity to run the country post-2019; it went further to highlight that through the President’s 800 metre walk, where he acknowledged the cheers of members of his constituency, was not intended at showboating, it was an unscripted reference point that further proves a fit and lively President.”

Shortly before the meeting with Buhari, Trump came under fire for allegedly referring to some African countries as ‘shithole’ at a private White House meeting on January 12. But he denied making the comment and labelled his accusers as fake news peddlers.

Last week, South Africa accused him of fuelling racial tension in the country after he tweeted that there was a “large-scale killing of white farmers” in the country.

His tweet came after a Fox News show about South Africa’s plan to change the constitution to speed up the process of taking lands from current owners without compensation to redress racial imbalances in land ownership.

The Peoples Democratic Party (PDP) desctribed theTrump comment as an “embarrassment,” in a statement by its spokesman Kola Ologbondiyan.

The Conference of United Political Parties (CUPP) also expressed indignation at the comment.