The Nine Kinds Of People Supporting Buhari For A Second Term 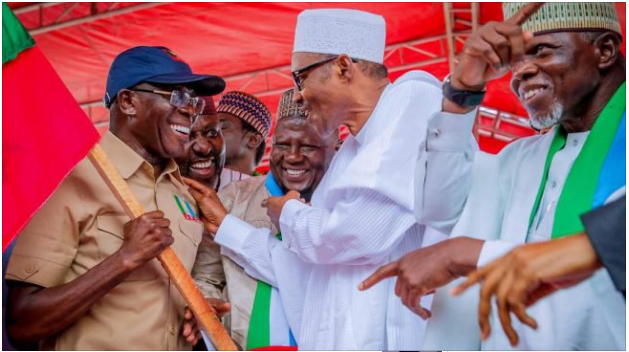 Corruption is fighting back! That is the constant refrain from the people in government and their supporters to criticism of President Muhammadu Buhari or opposition to his re-election ambition.
If, for example, you’re a journalist and you believe the President hasn’t done enough to earn a second term, it is because brown envelopes have been in short or no supply. If you’re a politician and you feel this way, you stole while in office or you will if you get there. All of us who have opted not to say ‘Sai Baba’ ahead of 2019 have one thing in common: corruption.

Fortunately for Buhari’s supporters, they can’t all be shoehorned into one homogeneous group. Who, who and who, or which classes of people, belong to this heterogeneous mix? And are they supporting their man in the country’s best interest?

The people in government: Around the time when former President Goodluck Jonathan was being told by some bigwigs in the Peoples Democratic Party (PDP) he could not contest the 2015 presidential election because he had served out the remainder of the late Umaru Yar’Adua’s tenure (2010 to 2011) and was serving out a fresh term of his own (2011 to 2015), he met with Lagos-based print newspaper editors. When one of them asked him if he would re-contest or not, he neither said yes nor no. But he asked them to look into the mirror; the editorship of many of them predated his presidency yet they were still in office. He wasn’t chastising them but making a valid point about how self-perpetuation in power is intricately human. It is no surprise that the people in Buhari’s government are desperate to have him back in 2019 despite the numerous and obvious red flags. Buhari is not the reason they support Buhari; their real interests are self-serving. To expect people in government to priotise the nation over self is a tall order very few people are capable of. The people in this group we must empathise with, not chastise.

The political jobbers: Buhari’s ascent to power is widely believed to have wrecked individuals and businesses that thrive on political jobbing, government patronage and official graft. While this may or may not be true, there is no doubt that there are individuals all over the country whose financial stocks have risen either directly through Buhari’s coming to power or indirectly through the people working with him. No matter the scale of poverty, government ineptitude, insecurity and anti-corruption hypocrisy in the land, these people will give anything for another four Buhari years. The challenge with having people like this around is that you never know why they do what they do or say what they say about re-electing the President in 2019.

The face-savers: If, like me, you clamoured for Buhari in 2015 because you considered him the ‘lesser of two evils’ but he lost you along the way in his presidential reign, it’s not the end of the world — and few things are more honourable in life than admitting a mistake when one has been made. If Buhari let you down with his biased handling of security, sending soldiers to the South-East to finish off the Indigenous People of Biafra (IPOB) without doing the same to terrorist herdsmen; or he slipped out of your good books with his bow-legged anti-corruption crusade, locking up corrupt opposition members with the speed of light but applying snail’s-speed treatment to similar elements in his cabinet, it’s not the end of the world and it’s not your fault. The people in this category are desperate to avoid the I-told-you-so smirk of Goodluck Jonathan’s supporters should they publicly express their disillusionment with Buhari. In here are people who are either against Buhari in private but with him in public, or are with him both ways but are constantly in a struggle with themselves on whether their choice is indeed right.

The PR strategists: These are about the deadliest of Buhari’s supporters — not because they can kill but because they can be sat right next to you but you won’t know, and also because they’re, more often than not, brilliant. They speak fluent English, write flowery prose and present mesmerizing arguments. However, for them, supporting Buhari is not about personal conviction but about professionalism in garnering public support for their candidate. There are so many of them dotting the social-media space. These guys are only just doing their job; nothing more.

The religious fanatics: These are the opportunity-cost supporters. Some love Buhari because they love him, others simply because of the Yemi Osinbajo factor. They are a blend of the two leading faiths — Christians who would support Buhari or any other President for that matter so long his deputy is a Redeemed Christian Church of God pastor; and Muslims who won’t stop chanting ‘Sai Baba’ even if pump price of petrol were to rise to N600/litre. To them, Buhari can be the opportunity cost of having Osinbajo in government, and they do not mind at all.

The ethnic jingoists: They want a Hausa-Fulani as President in 2019; simple. Not much needs to be said about this group, easily recognizable on social media by their names. We all have one or two of them on our timelines, don’t we?

The northern foot soldiers: These are a huge majority of the 12.7million people who voted for Buhari in 2003 or the 12.2million who did in 2011. In the last three years, nothing has changed about Buhari’s popularity in the North. As seen by the mammoth crowds that welcomed him during his recent visits to Bauchi, Jigawa and Kano, Buhari is still the most loved northerner alive. Pure, blind love. One of them trekked from Yola to Abuja to witness the presidential inauguration in 2015, but while he’s currently stuck at the Yola FMC due to a leg injury he sustained from the expedition, his “political role model” is re-energising himself in the UK. Still, whether or not Buhari extends his current 10-day vacation by 100 days, these people will vote him in 2019.

The APC supporters: Had Buhari been the PDP candidate, these people wouldn’t support him. But their loyalty belongs to the party and, by extension, its candidate. In this class also are people whose uncles, aunts, second cousins, in-laws, bosom friends, brother of their sugar daddy’s nephew or father of their friend’s sister’s husband, is contesting for some office in 2019 under the APC ticket. How dare you seek the party’s ticket without backing the President?

The naivetés: It’s honestly hard to blame them. They genuinely lack the ability to analyse issues beyond the surface. In their minds, Buhari is truly fighting corruption, bolstering the economy, killing off Boko Haram, providing exemplary leadership and putting food on the poor man’s table. And, above all, corruption is fighting back!

So, when next you run into someone who just doesn’t understand that Nigeria deserves better than Buhari in 2019, don’t get mad at them. Run through these nine groups and you will find one that best suits them, and you can therefore understand how their mind is working. And if you find some who fit into none of these nine groups, please feel free to create a tenth group for them.