6:40 AM CuteNaija 0 Latest News in Nigeria 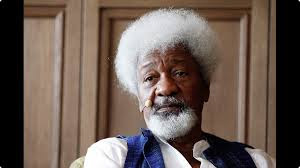 Nobel laureate Professor Wole Soyinka has criticised President Muhammadu Buhari for saying that rule of law can be suspended for the sake of national security or interest.


Soyinka claimed that Buhari was preparing an alibi for disregarding judicial decisions.

The President made the comment on Sunday at the opening of the 58th Annual General Conference of the Nigerian Bar Association (NBA) in Abuja.

Relying on a Supreme Court judgment, he said: “Rule of law must be subject to the supremacy of the nation’s security and national interest.

“Our apex court has had cause to adopt a position on this issue in this regard and it is now a matter of judicial recognition that; where national security and public interest are threatened or there is a likelihood of their being threatened, the individual rights of those allegedly responsible must take second place, in favour of the greater good of society.”

But Soyinka, in a statement titled Buhari’s pernicious doctrine’ faulted the President’s position.

Soyinka said: “Here we go again! At his first coming, it was ‘I intend to tamper with Freedom of the Press’ and Buhari did proceed to suit action to the words, sending two journalists Irabor and Thompson to prison as a reward for their professional integrity.

“Now, a vague, vaporous, but commodious concept dubbed ‘national interest’ is being trotted out as alibi for flouting the decisions of the Nigerian judiciary.”

Soyinka wondered if President Buhari’s incarceration by the former President Ibrahim Babangida’s regime was also in the ”national interest”.

He thanked the President for notifying Nigerians of his intentions in advance.

Soyinka said: “The timing is perfect, and we have cause to be thankful for the advance warning, since not all rulers actually make a declaration of intent, but simply proceed to degrade the authority of the law as part of the routine business of governance. We have been there before.

The playright challenged the the Nigerian Bar Association (NBA) to give a “robust response”.

He said: “It should be of mere interest, not despondency, that this latest proclamation of dictatorial recidivism has also been made before an assembly of officers of the law, the Nigerian Bar Association. We expect a robust response from the NBA as part of its conclusions.

According to Soyinka, “There is no short cut to democracy.

“The history of law, even where uncodified, is as old as humanity. Numerous rulers have tried again and again to annul that institution. Sometimes, they appear to succeed, but in the end, they pay heavy forfeit. So does society.

“The Rule of Law, however, outlasts all subverters, however seemingly powerful. If the consequences for society in defence of the Rule of Law were not so costly, any new attempt would be merely banal and boring, hardly deserving of attention. We know, historically, where it will all end.”