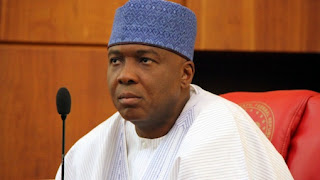 Senate President Bukola Saraki has formally declared his intention to contest the presidency on the platform of the Peoples Democratic Party.

Saraki made the declaration on Thursday in Abuja during his meeting with Not-Too-Young-to Run-Movement.

The Senate President lamented the poor state of Nigeria’s infrastructure and growing insecurity as exemplified by acts of terrorism, kidnapping, banditry and sundry other crimes which he said he would tackle if elected.

He said, “I hereby announce my intention to run for the office of President of the Federal Republic of Nigeria in the coming General Elections in 2019 on the platform of the Peoples Democratic Party.

“I do so with the firm conviction that I have what it takes to secure inclusive growth for Nigeria and Nigerians.

He said Nigeria was blessed with a relatively young country bursting with tremendous energy, ability and potential.

Saraki further observed that more than 70 per cent of the country’s population is under the age of 40.

The Senate President lamented that Nigerians were crying out for succour because a large number of its population of women and children were hungry and dying of avoidable or treatable diseases.

He also said many had fallen below basic living standards and were among the 87 million that sealed Nigeria’s position as the country with the highest number of people in extreme poverty.

Saraki said, “Our young people lack opportunities. The necessary education facilities and system to equip them for the future simply do not exist. We are not creating the jobs needed to usefully engage them in order to grow our economy. And too often, youths feel shut out, prevented from having any say in the direction of this nation.

“The harsh conditions of extreme poverty faced by the people, fuel the state of insecurity all over the country. Hunger, the lack of education and lack of opportunities, push many Nigerians into criminal activities including terrorism.

“Many of our communities are paralysed with fear due to incessant communal crises, kidnappings and other social ills, as well as the threat of terrorism. We are failing abysmally to tackle the problems of today and to prepare for the future.”

Nigeria, he said, needed a new generation of leaders that are competent, with the capability to rise to the challenges of the 21st century, adding that it was time to pull the nation back together and rebuild.

“The choice we face in the forthcoming election is either to keep things as they are or make a radical departure from the old ways; to find a better way of doing things or keep repeating the mistakes of the past, to fix the problems or keep compounding them,” he said.

Saraki promised to, among other things, provide a government driven by youthful energy, innovation and a pioneering entrepreneurial spirit.

Towards this end, he said Nigerian youths will be given all the opportunities to realise their potential to the full within a national framework that guarantees inclusiveness.

He said his administration will ensure that youths who have ideas and capacity will be funded in ventures that will be beneficial to the nation in order to create jobs.

“We cannot afford to compromise our institutions with proxy wars against perceived political opponents. We see the fight against corruption as crucial to Nigeria’s economic development.”

“It should be a leadership that can hold its own and stand tall anywhere in the world. That is the type of leadership I offer.” Saraki added.

Meanwhile, the Not-Too-Young-to-Run movement has distanced itself from the Presidential declaration of Senate President Bukola Saraki.

The group said it had only invited Saraki and other chieftains of the Peoples Democratic Party to a town hall meeting as part of efforts to ensure that youths were given some concessions ahead of the 2019 general elections.

It said it was shocked when Saraki seized the opportunity to declare his Presidential bid thereby compromising the event.

The statement read in part, “Whilst addressing participants at the town hall, Senator Saraki declared his intention to run for the office of the President in the 2019 elections. The movement wishes to express its disappointment with Senator Saraki for usurping a platform designed for young aspirants to hold dialogue with party leadership to advance his personal political ambition. We strongly condemn this act by the President of the Senate.

“The movement restates its commitment to sustain its engagement with political parties to ensure youth candidacy and democratic party primaries. As noted earlier, the movement reaffirms its identity as a non-partisan citizens led movement dedicated to the defence of democracy, political inclusion and transformative leadership.”