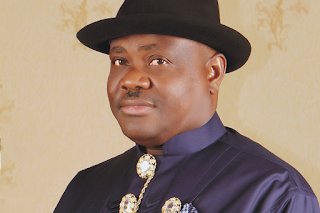 
Rivers APC, in its own reaction however said the duo’s movement to the leading opposition party was most anticipated and relief to the ruling party.
Wike in a commendation message to both high profile defectors said the harassment and intimidation being deployed by the APC FG was emboldening PDP leaders across the country to stand firm against tyranny, dictatorship and failed governance.

“I salute Saraki and Kwara Governor for being bold to say they will not be intimidated. I welcome them to the PDP which is being rebranded to take over the leadership of the country in 2019.

“More governors and senior politicians will still defect in the coming days. This regime of intimidation and harassment emboldens us . It strengthens us to stand against tyranny and impunity.

“It emboldens us to stand firm for interest of the people. We will resist any attempt to coerce us to cave in. Even under the Military, there has not been this nature of impunity. We are determined and have made up our minds to rescue Nigeria “, Wike said.

There is no hope, he noted, to continue with a leadership that has abandoned her promises to the people, adding that PDP represents the hope for Nigerians and good future for the country.

He described the case currently in Benue state as classical a intimidation technique of the APC, wondering at what time did Governor Ortom and his aides commit crimes and money laundering offences for which EFCC has been drafted to go after the state.

He recalled that in 2014, serving PDP Governors and federal lawmakers defected to the APC without intimidation, wondering why APC would resort to intimidation this time around which, he noted, would not save the sinking ship of the ruling party.

In its reflection on the development, Rivers APC through its Publicity Secretary, Chris Finebone, said the party was not surprised at the action by the Senate President and the Kwara Governor.

Finebone said, “The defection of Saraki didn’t come as a surprise to many except the opposition who are still in search of what to caress their badly injure political ego since their defeat in 2015.

“Just yesterday, the APC took backall its structures in Kwara because the continued stay of the Senate President in APC was not doing the party any good.

“From the day Saraki connived with the PDP to emerge Senate President against the run of play, he and his clique has been more of an opposition to the Buhari government than the formal opposition.

“So, his leaving is a huge relief to genuine APC members who crave to have a well knit party guided by well cut ideology and programmes. We expect further load shedding of more prodigals and black sheep ahead of 2019 to ensure we maintain focus and eliminate distractions of any sort.”