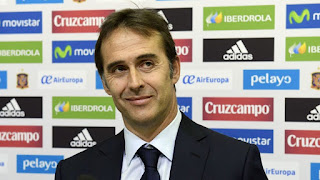 Real Madrid manager, Julen Lopetegui has admitted that “experts” Atletico Madrid “punished” his team in a 4-2 extra-time loss in the UEFA Super Cup on Wednesday night.


It was the first competitive match for Los Blancos without Cristiano Ronaldo and Zinedine Zidane.

The triple Champions League holders conceded twice in extra time, after the game ended 2-2 after 90 minutes.

After falling behind to an early strike from Diego Costa, goals from Karim Benzema and Sergio Ramos put Real back in a winning position, before Costa levelled with 10 minutes left.

After the match, Lopetegui told reporters: “A final is typically won by the team who capitalises on circumstances and Atletico are experts in doing that and they deserved to win.

“We aren’t happy with the result, it’s not normal for us to concede four goals and we need to improve. I insist that we played well, but they punished us with their goals.”

But Lopetegui insisted the team were still full of hunger to win silverware.

“It’s true they have won a lot but we have to focus on the season without thinking about what has happened in the last few years.

“We have to get the most out of the team and start to lift ourselves up now and start thinking about a league season which we are very excited about,” he added.