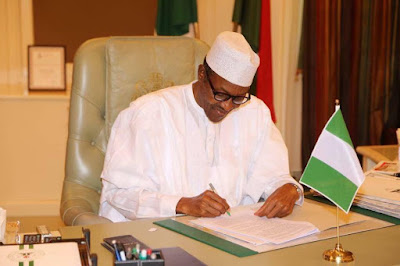 Loyalists of the immediate past Director-General of the Department of State Security Service (DSS), Mr. Lawal Daura have launched a move to make the National Security Adviser (NSA), Gen. Babagana Monguno and the Acting Chairman of the Economic and Financial Crimes Commission (EFCC), Mr. Ibrahim Magu pay for his sack.


The loyalists, including some members of the President’s kitchen cabinet and kinsmen, are understood to be putting pressure on President Muhammadu Buhari to fire Monguno and Magu.

They have already made a representation to the President on why the duo must go.

On the side of the Daura loyalists is a South West governor.

In their view, the sacked DSS boss was a “victim of a palace coup” who was sacrificed for the survival of the NSA, Magu, and a few other security chiefs.

They said the president must now proceed to overhaul the nation’s security architecture, sparing neither Monguno nor Magu.

But some other members of the cabinet are said to be kicking against any fresh plot to tie the fate of the NSA and EFCC chair to Daura’s travails.

They claim that the duo had no hand whatsoever in the sack of Daura.

A source said that the EFCC steered clear of the de-briefing and interrogation of Daura by other security agencies to avoid being accused of bias or retaliation.

Two letters to the Senate from the DSS under Daura were largely responsible for the decision of the Red Chamber of the National Assembly to deny Magu confirmation as substantive chairman of the EFCC.

It was also gathered that the Presidency has however called for “performance brief on the NSA and Magu.”

A well- placed source familiar with the development said the ripples over Daura’s removal have not abated.

“Those loyal and sympathetic to the ex-DG of DSS are up in arms by mounting pressure on the President to overhaul the nation’s security and anti-corruption architecture,” the source said.

“They specifically demanded the sack of the NSA and Magu too.

“They alleged that the ex-DSS DG was sacrificed in the absence of the President to ease him out of the equation in the presidency.

“They also alleged that the removal of Daura was timed to achieve a purpose for the NSA and the EFCC boss.

“Some of these forces even added spiritual connotations to the sack of Daura. They said some marabouts did the job on behalf of some key figures around the President.

“It is unfortunate that a governor from the South-West, who has links with a few corrupt ones, has been vehement in the sack of Magu.”

Continuing, the source said: “those backing Daura’s sack prevailed on the President not to bow to pressure to remove the NSA and Magu who has done so much to put the anti-corruption fight on proper footing.

“Some of the lobbyists and influential people from the Northwest are alleged to be getting tired of the Northeast elements around President Buhari. They are asking him to remove a few of these Northeast hands including the NSA and Magu.”

“The NSA and Magu had nothing to do with the fate of Daura. It was not a case of investigation for corruption or any financial crimes; it had to do with wrongful deployment of forces on a critical arm of government, which is the Legislature (the National Assembly).

“The vice president, Prof. Yemi Osinbajo, who was then the Acting President, had told the nation that the disciplinary measure was necessary to end impunity in the country. He described the DSS operatives’ invasion of the National Assembly as ‘a gross violation of constitutional order, rule of law and accepted notions of law and order.’

“Attributing such removal to the NSA and Magu will be unfair. It is even sad that a Southwest governor is among those driving this latest initiative to achieve selfish ends.

“The vice president also stayed away from elements of bias by disallowing the NSA and the EFCC from being part of the detention and debriefing of Daura in a safe house in Abuja. The Nigeria Police and other security agencies were directed to handle Daura’s matter.

“It will be disastrous for Buhari to start his anti-corruption war afresh because the ultimate target is to make the war a failure. Some of us have been warning against these Fifth columnists who are out to bring this administration down.”

A government source said: “There is a whole lot of confusion because some forces are desperate to create a wedge between the President and Osinbajo.

“At a time the nation is getting international recognition for its anti-graft war and arresting the killings and insecurity in many parts of the country, some forces have launched attacks on the NSA and Magu.

“It is on record that the ex-DG of DSS never took directives from the NSA who took it with equanimity. At a point, a former DG of the National Intelligence Agency (NIA), Ambassador Ayo Oke brokered peace between Monguno and Daura to work as one.

“Oke maintained the equilibrium among security chiefs; he also united all of them. He later introduced an interaction between the Intelligence community and the media which the NSA and Daura benefitted tremendously from.”

The source traced the cold war between the NSA and Daura to the constitution of the Special Investigative Panel on Arms Procurement on the $2.1billion arms deal in the Armed Forces, which was headed by AVM Jon Ode.

The ex-DG of DSS was said to be unhappy that no representative of his agency was part of the probe.

“Since then, a battle line was drawn by the two security chiefs,” the source said, adding: “Daura also felt that the eventual recommendation of Magu for EFCC’s job (after excellent outing as a member of the investigative panel) was meant to achieve a purpose. Unknown to him, the NSA only acted on merit, he did not know Magu.

“Despite curious letters to the Senate on why Magu should not be confirmed as the EFCC chairman, he never treated Daura with disdain. We do not know why these forces want to cause crisis in the presidency by pressurizing the President to sack those giving him results.”

The performance brief on the NSA and Magu

“The performance brief of the NSA and Nagu which the presidency is said to have requested is expected to guide President on his next line of action.

A source said: “the brief might determine the fate of the NSA, Magu and probably other security chiefs,” It was unclear as at press time whether or not Daura has been released from a “safe house” in Abuja.