Some governors elected under the platform of the Peoples Democratic Party (PDP) are currently on their way to Benue state to solidarise with Samuel Ortom, their Benue counterpart, whose position is being threatened. 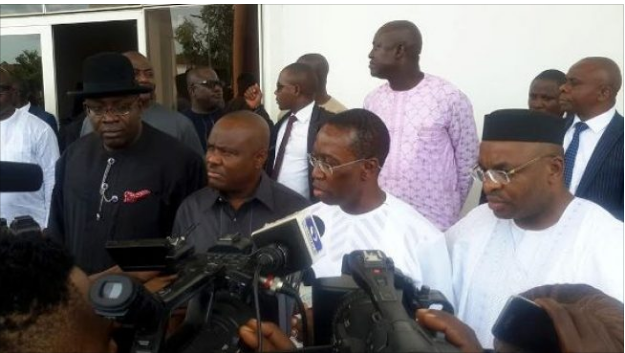 A top member of the party, who disclosed this to TheCable, said the PDP governors would reassure Ortom of the support of the party.

Ortom defected from the All Progressives Congress (APC) to the PDP last week, and on Monday, eight lawmakers of the APC served a notice of impeachment on him.

The next day, the Economic and Financial Crimes Commission (EFCC) said it had traced a fraud of N22 billion to him.

The governor has described the allegation as a witch-hunt, saying he was being targetted for leaving the ruling party.

The politician who spoke with TheCable said while in Makurdi, capital of Benue, the PDP governors would “issue a strong condemnation of the illegal attempt to impeach and remove Ortom from office”.

He added that the PDP had put in place a reception for all the politicians who defected from the APC.

He said the meeting will hold in Abuja on Wednesday evening.

“We are hosting all the APC decampees this evening at Hilton Hotel, Abuja. We need to welcome them home and assure them that the party will stand by them and support them against the attacks of the APC,” the source said.

The ruling party has lost some of its key members in the buildup to the 2019 general election.

A legislative source had told TheCable that Saraki took the action just as the leadership of the APC was finalising plans to expel him.

The national working committee of the APC under Adams Oshiomhole had dissolved the Kwara faction loyal to Saraki and issued a query to the senate president on Tuesday.

He was given 24 hours to respond to the allegations bordering on anti-party activities and frustrating Buhari’s government.

On Monday, president Muhammadu Buhari said he was not worried by the exodus that has hit his party.