Olubunmi Okogie, archbishop emeritus of the Catholic archdiocese of Lagos, says Nigerian politicians would not mind dragging the country into another civil war. 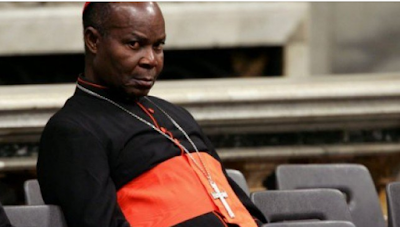 The cleric said this in reaction to recent political events in the country.

Okogie said Nigerians elect persons who are leading them on a fast track to disintegration because they are in the habit of looking for a messiah, a leader who would fit into the job description of Mr Fix All”.

While he condemned the recent practice of vote-buying during elections, Okogie said it is a well-known fact that the electoral process is riddled with corruption as it is oiled with money taken from the treasury.

He also described the blockade of the national assembly on Tuesday by operatives of the Department of State Services (DSS) as immoral and a desecration of the sacred space of Nigeria’s democracy.

“Politicians are grazing like herdsmen from one party to another because of their insatiable appetite for power and money,” he wrote in an open letter.

“In a dangerous game, and in gross violation of the principle of separation of powers, security agencies which ought to be loyal to citizens of Nigeria, show loyalty only to politicians in power, and are being used by the same politicians to fight their opponents.  Our politicians are dragging security agencies into their war, and that is extremely dangerous for this country.

“In their inordinate ambition, those in office would use every means to remain in power, while those who are outside would do everything to get into power.  Our land is witnessing a divorce of politics and morality.  Our politicians would not mind dragging Nigeria into another civil war.  They are in urgent need of conversion.  They need to make a U-turn on the way that leads to bloodshed.

“Nigeria, by her size, diversity and complexity cannot be fixed by one strong man.  Placed in the hands of one man, Nigeria’s problems assume increasing complexity, especially where the strong man is a man of many weaknesses surrounded by self-serving hero worshippers.”