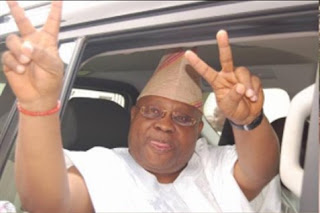 
The Presiding Judge, Justice David Oladimeji, gave the order to enable the parties to have access to the relevant documents for use during the hearing.

The News Agency of Nigeria reports that two members of the PDP in the state had approached the court for an interlocutory order setting aside the election of Adeleke as the PDP governorship flagbearer over alleged non-submission of his secondary school leaving certificate.

Adeleke was declared the winner in the PDP primary held on July 21 after garnering 1,569 votes to beat his closest rival, Dr. Akin Ogunbiyi, who polled 1,562.

But the plaintiffs, Rasheed Olabayo and Oluwaseun Idowu, in the suit filed on July 24, sought an interlocutory order setting aside the election of Adeleke, arguing that he did not satisfy the constitutional requirements to contest the governorship election.

Oladimeji, however, urged the counsel to take the interest of the people into considerations in whatever resolutions they reached in order to forestall any erroneous information that might heat up the polity.

The counsel to the plaintiffs, Mr. Olufemi Ayandokun, had earlier told the court that his clients were willing to explore amicable avenues of settlement due to the love for the party.

Ayandokun also said that all parties in the suit, especially INEC that was the principal party, had not been served the necessary documents.

The Defence Counsel, Mr. Edmund Boriomoni, said the matter before the court was the hearing of a motion on notice concerning an interlocutory injunction.

Boriomoni said that a counter affidavit had been filed to the application against his client, with a notice of preliminary objection challenging the jurisdiction of the court.