9:06 AM Mystique 0 Latest News in Nigeria 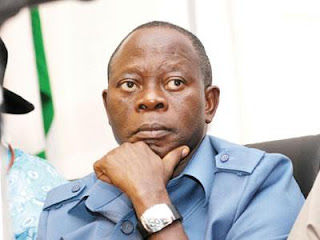 The National Chairman of the All Progressives Congress, Mr Adams Oshiomhole, on Wednesday inaugurated a new executive council and state working committee for the party in Cross River State.


The state APC had been in crisis since two parallel congresses produced two different executive councils in May 2018.

The executive council was inaugurated after being elected in a state congress conducted by a five-man congress committee led by Mr Henry Agbom and monitored by the Independent National Electoral Commission.

The new executive council, which has Dr Mathew Achigbe as chairman, Mr John Ochalla as vice chairman and Bishop Victor Ebong as secretary emerged through voice votes by the delegates at the congress.

Oshiomhole, who was represented by the National Vice Chairman, South-South, Chief Hillard Eta, said it was the wisdom of the National Working Committee to dissolve the parallel executive councils and elect  a new council to move the party forward in the state.

The congress committee Chairman, Agbom, said the party needed a united front in the state to take over government in 2019.

The newly-inaugurated chairman, Achigbe, expressed gratitude to President Muhammadu Buhari, and Oshiomhole for remaining committed to the rule of law.

He promised to work hard to ensure victory in the elections next year.

He called for the support of all members of the party to guarantee success.

The Senator representing the Cross River Central Senatorial District, John Owan-Enoh, said with the executive council inaugurated, the party would get stronger.