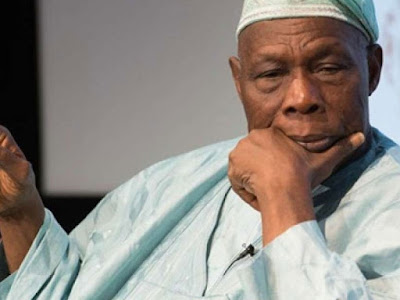 Ex- governor of Ogun State, Chief Olusegun Osoba, has accused ex-President Olusegun Obasanjo of laying the foundation for bad leadership in the country.

Osoba, who alleged that the ex-President manipulated the governors elected on the platform of the Alliance for Democracy in 1999 out of the Council of State, said that alleged manipulation by Obasanjo “was the beginning of the downward trend of leadership in this country.”

The journalist-turned-politician said the crop of state governors elected in 1999 through the open ballot system were still the best, noting that he and others never had any cause to be probed for corruption by anti-graft agencies.

Osoba spoke on Monday in Lagos at the 70th Birthday Colloquium of one of the co-founders of Newswatch Magazine, Mr Ray Ekpu, a contemporary of the late Dele Giwa.

The colloquium, with the theme, “Nigeria: The leadership question,” held at Muson Centre, Lagos Island and was chaired by a former Minister of External Affairs, Prof Bolaji Akinyemi.

Some of those in attendance were a former governor of Akwa Ibom State, Obong Victor Attah; the founder of Vanguard Newspaper, Sam Amuka-Pemu; Prof Pat Utomi; a former Deputy Governor of the Central Bank of Nigeria and presidential hopeful, Kingsley Moghalu; and the Chairman, Editorial Board, The Nation Newspaper, Sam Omatseye.

On the panel of discussants were the Executive Director of Enough is Enough, Ms Yemi Adamolekun; and Mr Debo Adesina.

While expressing his hope in the future of the country, Osoba said he believed that the proposed electronic voting in the amendment to the Electoral Act would eliminate election rigging in the country.

He blamed the emergence of bad leaders on the nonchalance of the educated citizens who slept in their houses on election day and left the exercise to thugs, “who sell their votes for N5,000.”

The guest lecturer at the colloquium, Dr Chidi Amuta, a lecturer at the Obafemi Awolowo University, Ile-Ife, said it was time that the use of sworn affidavits was banned as an instrument that could be used by people seeking elected or public offices to prove their ages and educational qualifications.

“Those who cannot remember when they were born or what school they attended and certificates obtained have no business leading anybody,” Amuta said in the lecture delivered on his behalf by Mr Dan Agbese, also a co-founder of Newswatch Magazine.

Amuta also called for the abolishment of immunity for public office-holders, just as he proposed that there should be a system of training leaders.

“Leadership requires tutelage; we should resurrect the defunct Centre for Democratic Studies to continuously train and orientate public officials on the rudiments of democratic governance,” he said.

In his contribution, the ex-Akwa Ibom State governor, Attah, rejected the claim that there had never been exemplary leaders in the country, saying he was one. He added that incumbent elected officers should leave the choice of their successors to the electorate, and break the culture of imposition of their candidates.

“Both the parliamentary and presidential systems have worked well in Britain and the United States where we imported them. So, why has none of them worked smoothly like a well-oiled Swiss watch in Nigeria? My considered view is that the operators of the constitution must be held responsible,” Ekpu said.

He also charged the citizens to wake up to their responsibility of demanding accountability from those in government.

In his remarks, Akinyemi said if the country was restructured, the North would lose some of their benefits, noting, however, that that would be better than for the North to lose everything “if things fall apart.”

Calls made to his telephone line did not connect, and he did not respond to a text message sent to him on the matter.

Also, he neither acknowledged the message sent to him on his Whatsapp page nor responded to it.