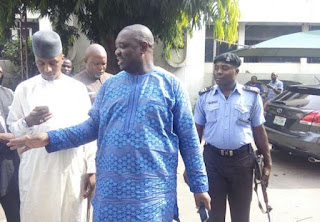 Chris Giwa says Thursday’s Extraordinary General Assembly of the Nigeria Football Federation  in Benin by the Amaju Pinnick faction of the troubled body is inconsequential, according to the  News Agency of Nigeria.


The  congress, among other issues, directed a review of the NFF election guidelines in a bid to accommodate all aggrieved parties.

The directive, which was part of the communiqué issued by the congress at the end of the meeting, also asked all parties to withdraw their court cases.

As part of the move to resolve the crisis in Nigerian football, the congress also called for  the ban on Giwa  FC, owned by Chris Giwa, to be lifted.

However, Giwa who spoke with NAN through Victor Iroele, his Senior Special Assistant on Media, said, “Pinnick gathered some of his close friends in Benin, with a view to holding what was termed a congress of the NFF.

“This is the first time in recent memory that a supposed NFF congress will not have a government representative, who is usually the Minister of Youths and Sports Development,”  he said.

Iroele rejected advice to Giwa to withdraw the orders of court recognising him as the NFF president with a view to contesting  a fresh election.

He said, “A Federal High Court sitting in Jos has declared the elective Congress of 2014 that brought Pinnick as illegal, null, void and of no consequence in law.

“The court has also, through Justice Musa Kurya, affirmed that Giwa shall hold office as NFF President pending when the suit before that court would be determined.

“The same orders have been re-affirmed by the Supreme Court. However, Pinnick continues to parade himself as the NFF president.

“The plea to reconcile with Giwa has indeed exposed his desperation to remain in office by having the court orders withdrawn.”

He added,  “In what seems to be another flagrant disregard for the laws of the land, the Benin Congress challenged the competence and jurisdiction of the Federal High Court, declaring its orders as ‘unnecessary distraction’.

“The said communiqué says there is no basis or foundation for the current court actions in the Federal High Court, Jos in Suit no FHC/J/CS/177/2014 over the same matter as it is clearly ultra vires to football rules and regulations.

“It is simply an unnecessary distraction to and detraction from the sustainable growth of football in Nigeria and has the potential to get Nigeria suspended from being a member of the global football family, FIFA’.”

“Ironically, Pinnick has approached the same court with three ex parte motions seeking to grant him temporary stay as NFF president and as you know, the court rejected all three motions and adjourned the case till  September  25.”