The Senate President, Bukola Saraki, has called for an independent judicial panel of inquiry into the siege to the National Assembly by masked security operatives last Tuesday. 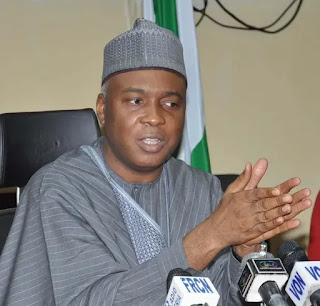 Acting President Yemi Osinbajo, had in a swift reaction to the invasion, sacked Lawal Daura as Department of State Service (DSS) Director General, for what the presidency described as an unauthorised action.

However, in a tweet on his personal @bukolasaraki handle, Saraki said: “The very serious questions about last Tuesday’s siege on the National Assembly can only be answered through a thorough and neutral investigation.

“I call on Mr. President to immediately institute an independent judicial panel of inquiry to look into that assault on our democracy.”

Meanwhile, Saraki and Speaker Yakubu Dogara, have given reasons why the two chambers of the National Assembly will not reconvene soon.

In a joint statement on Tuesday morning, they admitted that there were proposals to reconvene, to deliberate on the reports of the Joint Committees on Electoral Matters arising from interactions with officials of the Independent National Electoral Commission (INEC).

The presiding officers, however, said that the meetings have not taken place and that many legislators have also gone on Hajj, making the prospects for reconvening improbable.