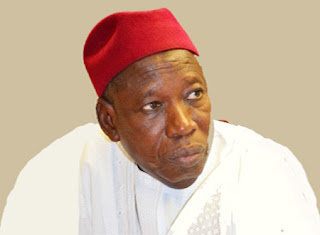 Movement for the Actualisation of Sovereign State of Biafra, MASSOB, yesterday promised not to disrupt the coronation ceremony of the chieftaincy award on Governor Abdullahi Umar Ganduje of Kano State in Aba, Abia State.


Recall that the group had in a statement condemned the award of the proposed traditional chieftaincy title on the governor and described the idea as a slap on Ndigbo.

The group reversed itself after the leadership of All Nigeria Ethnic Nationalities Youths Organisations, ANENYO, interfaced with them on the matter.

In a statement issued in Abakaliki, the deputy national chairman of ANENYO, Mazi Okechukwu Isiguzoro stated that issues revolving around the coronation of the Kano State governor have  been resolved, adding that MASSOB would no longer interfere with the exercise.

The statement read: “The leadership of Ethnic Nationalities Youths Organizations had met with Biafra agitators who said that Kano governor is not worthy to get  a chieftaincy title because of some sensitive issues raised.

“MASSOB led by Comrade Uchenna Madu as a cool headed leader with respect to Igbo culture and traditions will not disrupt the coronation of chieftaincy title on Governor Ganduje. After a long deliberation, I can assure our visitors of their safety.

“After a long deliberation with Biafra agitators, we can assure our August visitors, Governor Ganduje and his entourage of a peaceful  atmosphere during the coronation by chairman of South East traditional rulers, His Imperial Majesty, Eze Eberechi Dick.

“We will continue to unite our people towards achieving peace and tranquility in Igbo land.”