A+ A-
Print Email
In the world of legends, there are stories etched in the sand of time. Some have their stories woven with tragedy, some in heroic exploits while others spun in juicy fairy tales. For John McCain, a Republican US senator and war hero, he has been through these spectra of life. 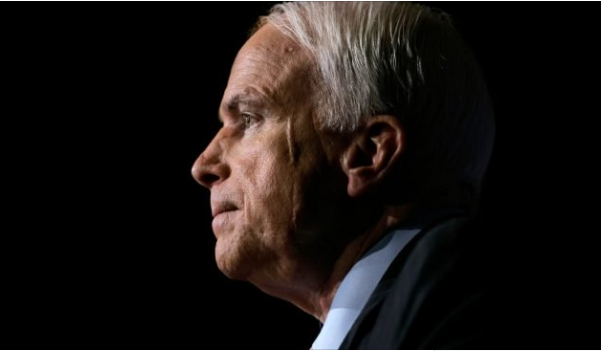 The man of many battles lost the last fight to death on Saturday three days to his birthday anniversary at the age of 81. McCain had struggled with bouts of skin and prostate cancer before succumbing to Glioblastoma, an aggressive form of brain cancer. Before his demise, his family had recently announced that the senator had decided to stop his cancer treatment.

Beyond that, there is more to the one-time prisoner of war who strove to become America’s president.

BIRTHED IN THE FAMILY OF NAVAL FIGHTERS
Born in August 29, 1936, in the Panama canal zone, McCain graduated from the US naval academy in 1958 to toe the path of his father and grandfather who were admirals in the US Navy. The light-weight boxer attended about 20 schools and always had difficulty with mathematics. McCain is a renowned gambler. He later retired from the navy as a captain with several decorations and awards.

PRISONER OF WAR
On October 26, 1967, McCain’s fighter jet was shot down by a missile while on a bombing mission over over North Vietnam. He parachuted into a lake while both arms and a leg were broken, and was captured by communist soldiers. He was tortured and beaten while in captivity. After his release in 1973, he was left with permanent injuries such that he couldn’t raise his arms above his head.

In a memoir published in May, McCain wrote that he hated to leave the world, but had no complaints.

“It’s been quite a ride. I’ve known great passions, seen amazing wonders, fought in a war, and helped make peace. I’ve lived very well and I’ve been deprived of all comforts. I’ve been as lonely as a person can be and I’ve enjoyed the company of heroes. I’ve suffered the deepest despair and experienced the highest exultation.”

THE MAVERICK SENATOR
McCain’s political career spanned 40 years. He started as a navy senate liaison officer after which he became a member of the house of representatives. He was first elected as a senator in 1987. For his knack for challenging party leadership, McCain earned himself the title of a “maverick Republican”.

In a fierce speech, McCain told his colleagues that they were elected to be a check on the president. He said, “We are not the president’s subordinates. We are his equals.”

TWO-TIME PRESIDENTIAL CANDIDATE
On September 27, 1999, McCain declared his intention to run for the presidency but later withdrew from the race and endorsed his opponent, George W. Bush.

He declared to run for presidency the second time in 2007 but was defeated by Barack Obama, who became the nation’s first African American president.

A CRITIC OF PRESIDENT TRUMP
McCain doesn’t hold back in criticising President Donald Trump over his alleged romance with Russia. He said Trump ideology as a departure from the values and traditions of global leadership.

While planning his funeral services prior to his death, he made it clear that Trump was not invited. He described his involvement with President Vladimir Putin of Russia as “one of the most disgraceful performances by an American president in memory.”