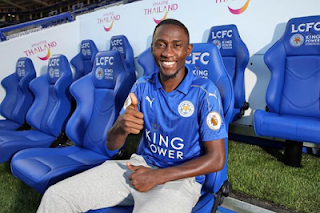 
The Foxes confirmed on their official website on Sunday that Ndidi, who joined them from Belgian Jupiler outfit  Genk in a five-year deal reportedly worth £18m in January 2017,   had  put pen to paper for a six-year contract extension  to remain at King Power Stadium until 2024.

The 21-year-old  tough tackling player, who represented Nigeria at the 2018 World Cup in Russia, has  reportedly  attracted interest from the likes of Manchester United, Arsenal, Liverpool and Tottenham, has transformed into one of  Leicester’s  most influential players since he  made his debut for the club in a 2-1 win against Everton in the third round of the FA Cup on January 7, 2017.

#lcfc is delighted to confirm that @Ndidi25 has signed a new six-year contract at King Power Stadium! #Ndidi2024,” the 2016 Premier League champions wrote on their Twitter feed.

Ndidi expressed his  delight at the new contract, saying he had been boosted by the club’s recognition of his contributions towards their success.

“I’m very happy to sign this contract with Leicester. I have enjoyed every moment of my time with the football club, so I’m thrilled to be here for six more years,”  the   player, who  was the Premier League’s most successful tackler last  season, told Leicester’s official  website.

“Together with my team-mates and our wonderful supporters, I hope we can look forward to many more fantastic moments.”