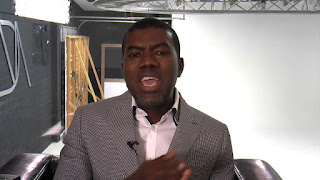 
Reno in a statement titled ‘Sadly, Nigeria has a Pinocchio for a Vice President!’ said ‘It is a notorious fact that the Jonathan administration outperforms the Buhari administration in every sphere of governance and in every aspect of the human development index.’

He also called the Vice President Yemi Osinbajo liar for saying that President Muhammadu Buhari’s government has done more in terms of infrastructure development than the previous administration, despite earning little from the oil, which is the main stay of the economy.

Reno reacting to Osinbajo said  ‘the recent comments by Vice President Yemi Osinbajo that the administration of which he is a part of has achieved much more than the Jonathan government is another in a long line of lies that the Vice President has come to be known for.

‘It beats my imagination why a man who claims to be an ordained pastor would have a habit of lying and lying so brazenly.

‘It is a notorious fact that the Jonathan administration outperforms the Buhari administration in every sphere of governance and in every aspect of the human development index.

‘I understand that the 2019 elections are just five months away and a desperate Buhari administration, like a student who has not read for his forthcoming examinations, is in panic mode, but they should please leave the good name of Dr Goodluck Jonathan out of their sordid mess.

The only way Professor Osinbajo can be correct is if he is referring to the fact that Nigeria, under their administration, has become the world headquarters for extreme poverty after overtaking India as the nation with the highest number of extremely poor people according to the World Poverty Clock and the World Economic Forum.

According to UNICEF, there are 10.5 million out of school children in Nigeria with about 60% in the Northwest geopolitical zone, where President Buhari comes from. Has the Buhari administration built even one secondary school to cater for them?

So by what logic can Vice President Yemi Osinbajo say that their administration has outperformed a Jonathan government that initiated, started and completed 165 almajiri schools as well as 12 new federal universities to cater for this mammoth out of school youth bulge?

How can they say their administration, under which Nigeria suffered her worse retrogression in Transparency International’s Corruption Perception Index (from 136 to 148) outperformed a government under which this nation made her best ever improvement in the CPI (from 144 to 136)

According to data published by the National Bureau of Statistics, in December of 2017, 7.9 million Nigerians had lost their jobs in the 21 months preceding that time. How can an administration with such an abysmal job record claim to have outperformed a Jonathan administration that, according to the same National Bureau of Statistics, created 6 million jobs through programmes like the YouWIN initiative, Local Content Law, Graduate Internship Scheme, Nagropreneurs and SURE-P?

Under the Jonathan administration, Nigeria was a magnet for investment and was the number one destination for foreign direct investment in Africa as rated by the Geneva-based United Nations Conference on Trade and Development (Unctad). Today, Nigeria is not even included in the top 10 in Africa.

If the current government is saying that by borrowing more money in three years than the Peoples Democratic Party borrowed in 16 years it has outperformed the Jonathan administration, then I am willing to concede that fact.

But to say that an administration that has not built even one single power station has outperformed an administration that built and commissioned the 500 megawatts Omotosho Power Plant Phase 2 with four gas turbines in Ondo State on Saturday, October 19, 2013 and also built and commissioned the 750 megawatts Olorunsogo power plant on Friday the 20th of February, 2015, is to be economical with the truth.

So widely known was the good governance of Nigeria under the Jonathan administration that at the Conservative Party Conference on October 10, 2012, the then British Prime Minister, David Cameron, said:

“Yes, we’ve been hearing about China and India for years but it’s hard to believe what’s happening in Brazil, in Indonesia, in Nigeria too.”

Can anyone in their right minds say the same about Nigeria today? That is a question our Pinocchio Vice President may very well not want answered.

Finally, let me say that the constant refrain by this administration of blaming their abysmal performance on the low price of oil is a case of a bad workman blaming his tools.

Today, crude oil averages at $74 per barrel. In 2017, the average price of crude oil was $51 per barrel. Need I remind Nigerians that the PDP government of President Olusegun Obasanjo paid off Nigeria’s entire foreign debt in 2006 at a time oil sold at less than one third what it sells today.

Sadly, the last three years has only shown that the Buhari administration promised Nigerians heaven on earth, but has literally turned Nigeria to hell on earth such that a nation that was rated by Gallup Polls as the happiest nation in the world in 2011 under former President Jonathan has dropped to being the 91st happiest nation in the world in 2018 according to the United Nations.’