Contrary to news that circulated on Thursday that the sacked Director General of the Department of State Services (DSS), Lawal Daura has been released, latest information has confirmed that he is still in the custody of the Nigeria Police. 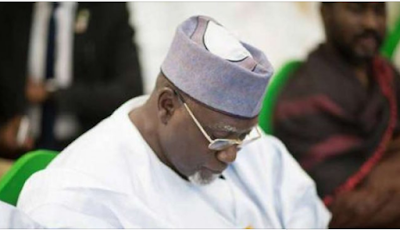 The Inspector General of Police, Ibrahim Idris, made this known in a report on Tuesday’s siege at the National Assembly.

The findings on the probe into the DSS action was contained in a memo Idris addressed to the Acting President Yemi Osinbajo.

The IGP said Daura was still in custody and that he was awaiting presidential order on the next line of action.

He wrote: “There is need to search the houses and premises of all identified suspects.

“All communication gadgets such as computers, mobile phones and other electronics devices of the suspects will be thoroughly analysed.

“Conclusion: It is crystal clear that the Principal suspect Lawal Musa Daura may be acting the script of some highly placed politicians to achieve selfish political goals., hence, his unilateral and unlawful decision to invade the National Assembly Complex.

“As it stands, the principal suspect, Mr. Lawal Musa Daura is undergoing further interrogation at our facility and is currently placed on house arrest at a private property in Birnin Kebbi close, off Birnin Kebbi Crescent, Garki II, Abuja, awaiting further directions from Your Excellency.”

The presidency has since appointed Matthew Seiyefa, the most senior director in the agency.

He was reportedly arrested in connection with alleged N17billion fraud in the agency.

The arrest was said to be part of ongoing probe of the sacked DG, Daura.

It was gathered that two ex-DSS chiefs could not account for the cash in the last three years.