I will tackle insecurity if elected president - Makarfi 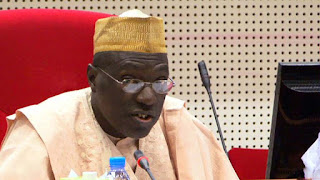 Former National Caretaker Chairman of the Peoples Democratic Party (PDP), Senator Ahmed Makarfi, has said he will bring an end to the growing insecurity currently ravaging many parts of the country if elected president in 2019.

He said Nigerians would be better off if he emerges as president because of his wealth of experience in governance.

“But like I had earlier said, if nominated by the party and elected by Nigerians, my priorities would be the issue of insecurity and stopping the killings in the country.

Speaking further, Makafi said: “When you say you have raised our Gross Domestic Product (GDP) by 7 per cent, yes, it is possible, but who benefited from the increase? That is the question!

“So, when you create wealth, it is only meaningful when it is legitimately and evenly distributed. You distribute wealth by creating employment, good paying jobs, not temporary jobs that people are paid peanuts and you begin to wonder whether the money being paid is transport money or a living wage.”

He noted that having served as commissioner, Governor of a state for two terms between 1999 to 2007 and a senator for two terms, he has all it takes to provide good leadership for the country.

The Abia State Chairman of the Party; Sir Johnson Onuigbo, assured the aspirant that when the time comes to take decisions, his sacrifice for the stability of the party will not be forgotten.