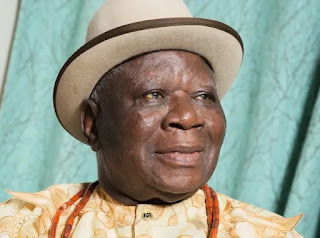 An elder statesman and convener of the Pan-Niger Delta Forum, Chief Edwin Clark, has denied writing an open letter to the Senate President, Dr Bukola Saraki, saying that the letter which is trending on the social media is the handiwork of mischief makers.


Clark, who clarified that though he wrote a letter five years ago to the Senate President, the said letter written in 2013, and circulating on the social media, was aimed at misinforming and misleading the public.

In a statement he personally signed on Wednesday, the Ijaw national leader observed that the issue which prompted the letter had been adequately addressed.

He stated that he was proud of Saraki for protecting the legacies of his late father, Dr Olusola Saraki.

Clark said, “The said letter which I wrote over five years ago was written out of despair and anger, at the time, to reach Dr Bukola Saraki, who was then the Governor of Kwara State, in order to mediate in a misunderstanding between my very close friend, his father, late Dr Olusola Saraki, Waziri Ilorin, his daughter Senator Gbemi Saraki on one side, and his son, Dr Bukola Saraki.

“The circumstances that led to my writing the letter had been settled long ago. Today, Bukola Saraki is my son with whom I enjoy a good relationship. It is, therefore, surprising that this letter written over five years ago was altered in the said social media publication to suit the whims of the authors.

“Let me reinstate that the late Dr Olusola Saraki, father of the Senate President,  Dr Bukola Saraki, was my very good friend and colleague in the Senate of the Second Republic where he was the Senate Leader. Thereafter, both of us were leaders of our respective geopolitical zones. While he was the leader of the Northern Union, I was the Leader of the South-South Peoples Assembly.

“Today, I have a duty to stand by my son, Dr Bukola Saraki, and also defend him, from any act of persecution, aimed at destroying his illustrious political career and his father’s rich legacy.”