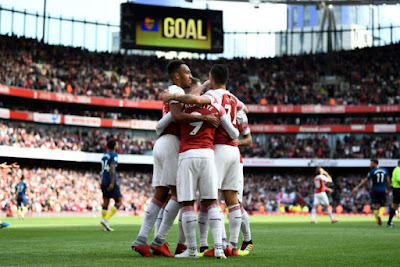 
The defensively frail Gunners came from behind to lead in fortuitous fashion as Alexandre Lacazette’s volley across the area deflected in off Diop.

Hector Bellerin then picked out an unmarked Welbeck in added time and the substitute turned to lift his effort past Lukasz Fabianski.

Both Arnautovic and Robert Snodgrass then shot straight at Cech as the Hammers missed several chances to take the lead again, with former Gunner Lucas Perez also slicing wide late on in search of an equaliser.

The first half at times resembled a contest to determine which side’s defence were more inept, with Arsenal edging it.

Their tactic of playing out from the back with Shkodran Mustafi and Sokratis Papastathopoulos split either side of Cech was too easy for West Ham to disrupt, particularly with neither centre-back looking overly comfortable or mobile enough on the ball.

It led to several chances for the visitors, as did having full-backs Monreal and Bellerin pushed up high – the latter especially offered plenty of threat going forward but it meant West Ham had plenty of space to counter-attack into.

Anderson exploited that space brilliantly throughout, carrying the ball from deep to drive at the Arsenal defence, before playing a one-two with Arnautovic through Mustafi’s legs and allowing the striker to pick his spot in the bottom corner from outside the area.

Elsewhere, Arsenal failed to pick up runners, with the offside Arnautovic wisely leaving Michail Antonio’s through ball for the overlapping Snodgrass, only for the Scot to pick out Cech.

The hosts escaped with a win here but better sides will both carve them apart and finish their chances if the defending does not improve.